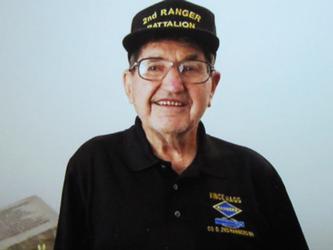 Vincent Richard Hagg, 92 of Tyrone, died Wednesday, January 3, 2018 at Epworth Manor. Vince was born July 18, 1925 to parents, Ralph and Emma Schoch Hagg who preceded him in death. He is survived by several nieces and nephews as well as a very special friend Phyllis McCue. He was preceded by 2 sisters: Sister Lambert and Louise Hagg and 3 brothers: Joseph, Gene and Francis Hagg.

Vince was a 1944 graduate of Tyrone Area High School. He entered the U.S. Army and became one of the youngest Army Rangers. He served in the Euopean Theatre of Operations as a Sergeant in the Second Ranger Battalion, “D” Company. He was one of the men who landed on Omaha Beach during the 2nd day of the D-Day operation. He was the recipient of the Combat Medal with 5 Bronze Stars. In 2011 he was appointed a Chevalier of the French Legion of Honor for his action in France. In addition, he also received the Combat Infantryman Badge, the Good Conduct Medal and the Bronze Star Badge. He was honored in Washington, D.C. during the 2015 National Memorial Day concert and was a part of a group of Army Rangers representing the United States in France at Normandy Beach for the 2016 D-Day Celebration.

Vince returned home and attended St. Francis College where he graduated from with a B.A. Degree in 1950. He went to work for Rockwell International in Pittsburgh from 1951 to 1973 and then moved home and worked for Altoona Pipe and Steel Company as a Sales Engineer until his retirement in 1994.

Vince was a member of St. Matthew Catholic Church. He was also a member of the Tyrone Elks Club B.P.O.E #212, Tyrone Howard Gardner Post #281 American Legion, Anderson-Denny VFW Post 4559, a life-member of the Bavarian Aid Society as well as a member of both the Tyrone Knights of Columbus and the Tyrone Monogram Club. Vince was an avid Tyrone football booster and enjoyed cooking. His specialty was a dandelion salad.

Friends will be received from 4 to 6 p.m. Friday, Jan. 5, 2018, at Richard H. Searer Funeral Home Inc., Tyrone. A funeral Mass will be celebrated at 11 a.m. Saturday, Jan. 6, 2018, at St. Matthew Catholic Church, Father Jozef Kovacik celebrant. A flag presentation with military honors will be performed by the Tyrone Honor Guard, following the Mass. Interment will be made at Oak Grove Cemetery, Tyrone.

Vinny and i were great friends at the St Matthews school. I use to walk over the mountain on weekends and we played football on the farm.Great guy. He is in my prayers.George J. Schneider.Framingham,MA( [email protected])

I just found out about Mr. Vincent Hagg's passing. Our deepest condolences to his family. Our dad was in the 2nd Ranger Bn D Company with him. Such a wonderful kind gentlemen. Spoke with him on his birthday. He was so happy how his family helped him. God Bless, Donna Sparaco

All our most condolences to his family and friends We was privileged to spend some time with him last year in Normandy , him stay in our heart RIP Ranger lead the Way

Ranger Lead the Way Forever ...
My condolences ...
Thierry from Belgium

My condolences to his family and friends. Met him in person in Normandy. We had a little talk about his time in the war. It's sad to hear of another passing of a world war 2 veteran. Rest In Peace Vince.

As a Navy D-Day veteran of Omaha Beach Normandy I was privileged to spend some time with Vince last year in Normandy and at Point-du-Hoc. I feel that I made a new friend. It is sad to hear of his Passing. Rest in Peace, Vince.

It was a great honor to call Vince my friend. He made so many new friends in France last year and he thoroughly enjoyed being there again. He will be truly missed by all. My condolences.

Never miss an update about Vincent. Sign up today.