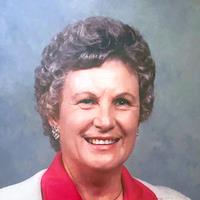 The family will greet friends from 6:00 p.m. to 8:00 p.m. Wednesday at Bishop Funeral Service.

A funeral service will be held at 10:00 a.m. Thursday at Bishop Chapel of Memories officiated by Rev. David Cantrell and Rev. Chip Lott.  Burial will follow at Hugh Low Cemetery near Scipio.

Vivian was born to Jessie Sherman and Lillian (Cantrell) Lott on September 7, 1929 northwest of Scipio. She graduated from Lamar High School and received a business certificate.

During her life she was a homemaker, cattle rancher, and farmer.  Vivian was an active member of the Scipio Baptist Church where her husband Allen was a deacon.  She enjoyed fishing, camping, serving the Lord, and church activities.

So sorry for your loss of this beautiful Lady.

Never miss an update about Vivian. Sign up today.