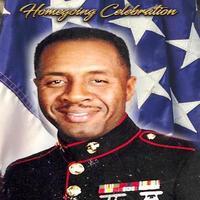 Wayne Curtis Spires was born on October 7, 1957 in Bentonia, MS. to his beautiful mother Elouise Willis-Spires. At an early age Wayne developed a passion for cooking and a love for Christ. He joined Pleasant Grove Missionary Baptist Church in Bentonia, MS. and later moved to Jackson where he rededicated his life to Christ under the leadership of Pastor Willie J. Berry and joined Metropolitan FGB Church. After dedication, he served faithfully as a Deacon, until he transitioned to his heavenly home.

Wayne attended Lanier High School in Jackson, MS. and then served in United Stated Marine Corps. He successfully protecting our country during Operation Desert Storm and received numerous of accommodations and awards for his servitude. After more than 20 years of service, Wayne retired as a 1st Sergeant of the United States Marine Corps. After retirement, he continued to serve our community as a Code Enforcement Officer for the City of Jackson and Jackson Police Department.

Sorry to read about Wayne's passing, I was stationed in Jackson from 1988-1991 and remember the great times I had visiting with the family for barbeques and taking Curtis and Dewan to acouple of ball games, Wayne and Delean were like family to me along with Sam and Loraine Gardner while I was stationed there and now Wayne and Delean are both gone, my prayers are with you all. Semper Fi. Richard Curd USMC (Veteran)

My deepest condolences to the family!

Duke was one of a kind. Great friend and classmate. He will be missed by all. It doesnt seem real. I miss him already.

As the days and weeks pass, and as you return to life's routine, may you continue to feel comforted by the love and support of family and friends. 833 c/o 77 forever!!!

Never miss an update about Wayne. Sign up today.