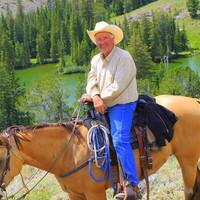 Wes Hamilton passed away May 5, 2021 due to complications with multiple sclerosis and a serious fall, in which he passed quickly.

Wes was born to Walter and Mona Hamilton. He had four older siblings Donna Gay, Dennis, Layne, and JaNae. He was born and raised in Blackfoot, Idaho. On his parent’s ranch in the Riverton area, his time was spent hay hauling, riding horses, fishing, and helping with cattle. He played baseball and basketball in his youth. Wes continued to play baseball for Rick's college for 2 years. After playing for Ricks College, he served a mission in Harrisburg, Pennsylvania. Upon returning home he pursued education and graduated at BYU Provo.

After graduation he went to work for Geneva Steel in Provo, while there he met his wife Annette. Soon after they were married, they moved back to Blackfoot, and he began working in accounting. He later pursued a career in ranching and worked hard to see things done the cowboy way.

Wes and Annette are blessed with two children Matthew and Krista. He taught his children the value of hard work around the farm. And he supported them in their athletic and academic goals. He had a great talent to break horses that proved so beneficial to his ranching career. Out of all of his life enjoyments catching a nice trout and moving cattle to summer grazing in the hills, he beloved the most. He was a member of The Church of Jesus Christ of Latter-day Saints and also enjoyed giving service in callings.

All are welcome to join.

Condolences may be shared at www.hawkerfuneralhome.com.

Wes was one of the Boy Scouts my dad, Darwin Thompson, had charge of as a scoutmaster. As such, he was special in dad’s heart. I remember Wes speaking in sacrament meeting before he went on his mission. I remember the phrase “I just hope . . .” In something he read. That has stayed with me as I exercise hope that my service to the Savior will please Him. I remembered it when I served my mission. God bless his family.

I remember the fun times with Wesley in our Riverton neighborhood.

I was sorry to learn of Wes's passing. Wes is one of the people I fondly remember for the many shared experiences of growing up in Blackfoot.
We shared many different venues. We often road the same bus. Wes was a much better athlete than me but, I remember playing on the same teams. I also remember spending the harvest breaks picking potatoes in our fields. For many years Wes, his mother, and sister JaNae picked potatoes for us. My mom, sister, and I picked potatoes for many long...

My heart aches with the news of Wes passing. I was a neighbor of Wes and would come visit just to talk to him. The days spent with Wes will never be forgotten and sympathy to his family for loosing such an amazing person.

My heart and prayers go out to Annette and the family. I'm sorry I am unable to be there but health concerns keep me from attending.

Uncle Wes is such an amazing man! He taught me to ride my first horse. He always welcomed us in his home with so much love and happiness. He will be so missed! ❤
We are always thinking of you all, sending all our love!

Matt was a good friend to my son Trey. Sorry for your loss.

Wes was so welcoming and sincerely a good friend. I always enjoyed entering the High Council room and seeing his big smile and taking the empty chairs beside him. Our family enjoyed some horse rides and cattle drives with him. What spectacular memories of beautiful cloudless summer days pushing cattle across Fort Hall with Wes and some of my grandkids. They still talk about the adventure of catching a bum lamb among all his cows. We all send our heartfelt love to those he left behind.

Never miss an update about Wes. Sign up today.