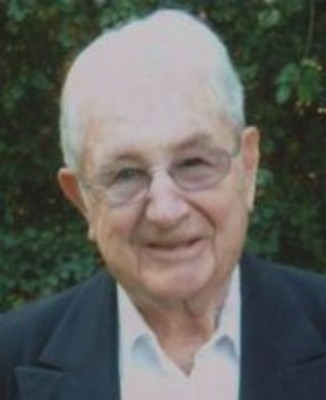 Wesley Beck died of pneumonia on June 25th, 2013. His 93 years were focused on family, the community, Naval service defending his country and following sports. He was a jovial, congenial gentleman who enjoyed talking to anyone, particularly about sports.

Duke was a devoted husband for 65 years to the late Imelda "Millie" who preceded him in death just months ago. He was the loving father of Constance (Gary) Wald, Ted (Diana) Beck and the late Terrance Beck. He was the proud grandfather to Chris, Will, Kat, Laura, Jennifer and Derek and great grandfather to Daphne and Clayton. He was the son of the late Emma and Nicholas Beck and was preceded in death by brother, Daniel.

Duke was raised in Dubuque, Iowa, attended the University of Iowa and watched virtually every Iowa football game, though he would also root for Notre Dame and the Badgers as long as they weren't playing the Hawkeyes.

Duke had a long and successful stint in the Navy: He enlisted in 1936; served on the battleship U.S.S Utah in Hawaii; survived numerous North Atlantic convoys between England and Newfoundland and a tour of duty in the South Pacific. He was in the Philippines at the end of WWII. He was discharged as Lieutenant Commander.

Duke enjoyed giving back to the community and was proud of his civic contributions. He was a two-time President and Board Member of North Shore Golf Club, President of the local United Way, Vice President and Treasurer of Saint Margaret Mary Catholic Church of Neenah, and Vice President, Treasurer of Goodwill. His dedication and hard work were respected and deeply appreciated. He will be missed.

Memorial services will be held at 11:00 a.m., Friday, June 28, 2013, at St. Margaret Mary Catholic Church, 620 Division St., Neenah, with Fr. Michael Ingold officiating. Inurnment will take place in Lakeview Cemetery, Fort Atkinson. Visitation will be at the church on Friday from 10:00 a.m. until the time of the Mass. Full Military honors will be presented by members of the U.S. Navy and the Neenah Menasha Veterans Honor Guard, immediately following the Mass. In lieu of flowers, memorials are appreciated to St. Margaret Mary Catholic Church, Neenah.

Mary Beck told us of the loss of your dad. Our thoughts and prayers are with your family. We hope the good memories of life with your dad give you peace and joy.

To the family of Duke Beck,

We've never met, but our heartfelt sympathy goes out to your family at this time of loss. Our Dad Cletus Beck passed away in January 2012 and we understand your grieving at the passing away of your beloved Father.

I'm sorry for your loss. May God give you and your family peace in your time of sorrow.

Dear Ted,
I'm so sorry to hear of your loss. My thoughts and prayers are with you and your family.
Sincerely,
Margie

He was an impressive man. All the best to the Beck family (and extended family) during this time.

To the family of "Duke",
I am very sad to see him gone. I enjoyed talking with him. He always asked if the Brewers won the night before. Of course I always had to read it in the paper, I am not a sport nut. I was with Millie when she passed and cried with Duke. They are together again and they will both be missed.
You have my sympathy.

Dear Ted,
Susan told me about the loss of your Dad. Please accept my sympathies for this difficult time. I've learned that parents live on in our memories and hope that holds true for you.
Sincerely,
Mare

I wanted to let you both know that I am keeping you and your families in my prayers. I hope God can give you the strength to get through this difficult time. I wish I could be there in person.

Never miss an update about Wesley. Sign up today.