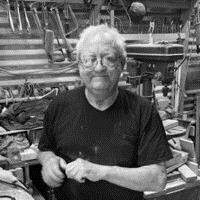 On Wednesday, September 8, 2021, William Hesford was called home at the age of 76.  The world has lost a great son, brother, husband, father, grandfather, and great-grandfather.  Bill was born in Muscatine, Iowa on July 10, 1945.  He joined the United States Navy after graduating high school and was then stationed in Memphis, Tennessee.  That is where he met his beloved wife, Janice Anita Gandy, on a blind date.  It was love at first sight according to Bill and Jan, and they were married on December 3, 1966. The two were married for 54 years, and recently renewed their vows among family and friends on April 21, 2018.  Bill was a skilled carpenter and took great pride in his work. He worked for Makowsky & Ringel Greenberg for almost 20 years.  He could fix anything and always did everything to perfection. He was a hard-working man, who sometimes worked 16 hour shifts to provide for his family.  When he was not working, he enjoyed spending time in his garden.  You could not leave Bill’s house without getting sent home with an armful of fresh vegetables picked straight from his backyard. He used his skills in carpentry to share the art with his children and grand-children. Bill even started to teach his great-grandchildren, Flor and Eli, his love for the craft.  Bill loved to spend time with his family, hardly ever missing a sports game and always hosting a household full of love and laughter.  Bill was a man of God, full of wisdom and advice.  He always offered an ear to listen or a shoulder to lean on - whether you were family or a stranger who just needed a friend.  That was what was so special about Bill - he was a friend to everyone.  Bill is joined in heaven by his paternal grandparents Virgil Leroy Hesford and Mazo Gladys Darting Hesford; his maternal grandparents Charles Herbert Belanski, Alberta Francis Phipps Belanski Grecie, and step-grandfather Carmen D. Grecie; his parents William Virgil Hesford and Alberta Louise Belanski Hesford; four brothers Herbert William Hesford, David Charles Hesford, Russell Lee Hesford, and an infant; and two sisters Mary Frances Hesford and Mary Louise Hesford. In addition to his beloved wife Janice, he is survived by his loving daughters Beth McDonald(Terry), Marie Truitt(Scott), and son Jonathan Hesford; seven grandchildren, and six great-grandchildren; three sisters Juanita Snyder of Muscatine, IA; Cathy Howell of Drummonds, TN; Lori Jarr of Muscatine, IA; and one brother, Steve Hesford of Muscatine, IA; and many nieces and nephews. Bill’s life will be celebrated by his family and friends at Harmony Church of Bartlett, 6740 St. Elmo Road, Bartlett on Thursday, September 16, 2021, with visitation beginning at 4:00 p.m. The service time is 6:00 p.m.

Billy was a great brother, been through a lot, but always had a smile on his face and God in his Heart. He will be greatly missed by all. Love you, Kid

Beth. Thinking about you and your family during this tough time.
Morris and Karen Griffin

I never had the privilege of meeting Mr. Hesford but having Marie as my dear friend tells me that he had to be a ‘one of a kind’ man to have such an amazing ‘one of a kind’ daughter. My heart is broken for your loss. My thoughts and prayers will remain with you during this difficult time.

RIP to my sweet brother in law.