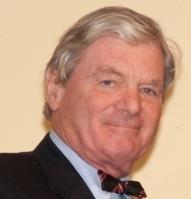 William Adolphus Briggs Jr.
William Adolphus Briggs Jr., 78, of Sarasota, FL, formerly of Newport and Jamestown, RI died on Sunday, February 2, 2020, in Sarasota. The cause was cardiac arrest.
Bill was born in Nashville, Tennessee on April 8, 1941 to William Adolphus Briggs and Harriet Durstine Briggs. He was raised in New York City along with his older brother, Anthony (deceased), and younger brother, Henry.
He attended the Malcolm Gordon School in Garrison New York, The Fenn School in Concord, Massachusetts, and St. George's School in Newport, RI where he quarterbacked the football team, captained the swim team, and was a prefect in the student government. Following graduation in 1959, he spent a year in London at the Highgate School on an English Speaking Union Scholarship, then matriculated at Princeton University, where he studied architecture and was a member of The Ivy Club and the swim team. He earned a Bachelor's degree, magna cum laude in 1964, and his Masters in 1966.
Beginning that year, Bill practiced architecture for several large firms in Connecticut and Chicago before returning to his symbiotic roots in Newport, RI, where he was Director of Development at St. George's from 1978 to 1985. He also served on the St. George's Board of Trustees from 1970 to 1994.
In 1995, he joined DOCA (the Defense Orientation Conference Association), eventually serving as President for two years and Chairman for two years.
An ardent Rhode Islander, over the years he was a member of the Newport Country Club, Reading Room, Clambake Club, and Bailey's Beach, Narragansett's Dunes Club, Jamestown's Conanicut Yacht Club and the Naval War College Foundation.
Bill leaves his wife, Joan, his children, Elizabeth H. Briggs of Sarasota, FL, Wendy Briggs Powell of Hopkinton, NH, and William A. Briggs III, of Boston, MA, a brother, Henry Briggs of Ft. Myers, FL, six grandchildren, seven nephews, and four nieces.
A funeral service will be held Saturday, February 29th at Trinity Church in Newport at 10:30 am. There will be a reception following the service at Honeyman Hall, adjacent the church. Burial will be private.
In lieu of flowers, memorial donations may be made to a charity of one's own choice.
Funeral arrangements are by the O'Neill-Hayes Funeral Home. For more information and online condolences please visit www.oneillhayes.com.