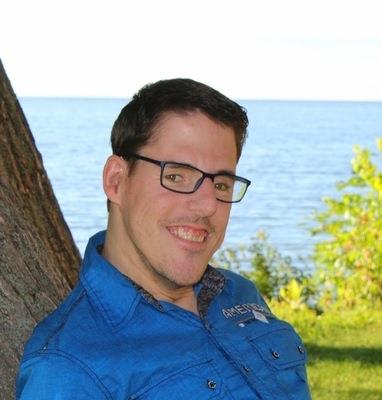 GREEN BAY - Every child is a gift from God, and every child is special. But some children are angels that God sends down from Heaven to change all of us here on earth. Such is the case with Zachary John Salewski, born on December 24, 1987. From the moment he arrived 15 weeks early, his parents knew that he had a special purpose, and that purpose was realized from the start. To inspire others! After spending 515 days in the hospital he finally came home with a lot of medical issues. The doctors didn't know if he would walk or talk. Through hard work, great teachers and therapists he surpassed all expectations. He graduated from Preble High School in 2007. Shortly after he started working for Festival Foods as a bagger for over 10 years. First at West Mason then Bellevue and then finally at the new store on University. He was a 2 time recipient of the Beulah Ballestad award from Brown County Curative Connections for facing adversity with courage and grace. Zach also was a spokesman and appeared annually for the Children's Hospital Miracle Network telethon for many years.

On June 12, 2013 Zachary was diagnosed with stage 4 small bowel cancer. Zachary endured 6 years and 9 months of strenuous treatment including 6 different chemotherapy's, surgeries, countless blood transfusions, 2 clinical trials at The Mayo Clinic, 2 clinical trials at The University of Chicago and finally a clinical trial at The University of Michigan which worked great to clear the cancer from his lungs. He was 1 of only 80 patients worldwide on this trial. Because of Zachary's fast and great results on the drug AMG510 they opened 30 additional slots worldwide for other colon cancer patients. Even though it worked for his lungs, cancer is smart and this new drug didn't protect his brain. Through what seemed to be impossible odds, Zachary fought with tenacity and overcame obstacles that at times had his doctors dumbfounded.

For many years, Zachary's health and happiness was nothing short of a miracle. His family relished every opportunity to make memories. He enjoyed movies, plays, reality T.V. Shows and celebrities. A few of his favorites were the Kardashians, Jessica Simpson and Teen Mom. He read every celebrity tabloid there was. His biggest wish was to go to Hollywood. With the help of friends and family we were able to make that wish come true in May 2018. He had the best time and made so many memories.

On March 23rd 2020 Zachary met Jesus, and at once his cancer disappeared as if it had never happened. All his tumors, all his scars, all his pain, all his tears are now gone, and he will have everlasting life with his Creator. He passed in his own home surrounded by his loving family. We will never be the same.

In just 32 short years, Zachary touched more lives than many would hope to do in a lifetime through his strength, his kindness, and his perseverance. Despite his own pain, he would try and make everyone around him happy especially his niece Gwendolyn. Zachary never stopped fighting, and in his gracious fight, he demonstrated what it means to be joyful regardless of circumstances. He showed the world what it means to never give up, to never lose hope, and to never take a single moment for granted.

Though cancer took his body, it never took his spirit. Cancer did not win - Zach defeated it every single day with his ever-present smile and contagious laughter. No, cancer could not win against Zach, for he took the darkest circumstances and turned it into a glorious light for all who had the pleasure of knowing him. His light was his purpose, and he fulfilled it with excellence. He has been welcomed into heaven and greeted by his Father and the words "Well done, my good and faithful child."

Zachary is survived by his loving parents Kevin and Susan, his second mother Ellen Flick, his brother Joshua and Nicole Salewski, his very special niece that meant the world to him, Gwendolyn. His grandparents Patricia and Chuck Steiner. His Aunts and Uncles, Laurie and Andy Pfotenhauer (really his other mother), Tim and Terri Steiner, T.J. (Mindy) Steiner and Kim and Randy Ronsman. First Cousins who were a huge part of his life Emily Burkel, Kayla (Kyle) Steiner, Katy and Kelley Krouth and Alex Ronsman. He is further survived by many Great Aunts and Uncles that he was very close to. There were also many second cousins that were a big part of his day to day life, Angie, Tricia, Missy, Jenny, Brent and their children.

A celebration of Zach's life will be held at a later date. Online condolences welcome at www.PfotenhauerFuneralHome.com

We would like to thank so many special people but they are too numerous to list; Team Zach for all of their love and support; Green Bay Oncology, especially Nicole Spaeth; Froedtert Hospital; Mayo Clinic; The University of Chicago; The University of Michigan and all the special doctors and nurses we met along the way; Brown County Curative Connections.

We wish to thank his biggest supporter, Grandma Pat Steiner, for always being there for the past 32 years.

I am so sorry to here about Zachary. I was the manager at the old Marc Cinema and he and his mom would come into the theater quite regularly. They were both so friendly and Zachary was always excited to see whatever movie they were seeing. I may not have known him well, but it was always a pleasure to see him. Rest in Peace.

I am so sorry to hear of the loss of Zachary. He's one of the strongest people I have known. I will always remember the first time I saw him working at Festival. I was so proud of him and everything he had overcome. May he rest in peace pain free.
Lisa Brotz

Zach fought for his life with so much courage and strength. I know he will be missed alot.

Dear Salewski Family,
Words cannot express how deeply sad we are to hear of Zachs passing. I will hold on to the wonderful memories we had with Zach at Red Smith School and the time we had out on our lunch dates. He was one amazing young man. You are one amazing family. My God bring you courage and strength at this most difficult time.
Ann Duschene and Family

Sorry for your loss. Zach will be deeply missed by everyone in the community and beyond

Kevin and Sue;
I am so very sorry for your loss. I remember Zach as such a wonderful package of smiles and positive energy. He was a great treasure and he fought so hard against everything life threw his way. He is soaring with the angels now.

Zachary certainly was an inspiration to many. I always admired his never give up attitude. He would openly talk about his battle with cancer but never gave up the good fight. I could go on and on.....May God Bless him and may he rest in peace. Peace and comfort to his family. Both my husband and I worked at Festival Foods with Zach. There was a lot to learn from this young man. Good job Zach.
Roger and Lynda Shaha

Never miss an update about Zachary. Sign up today.