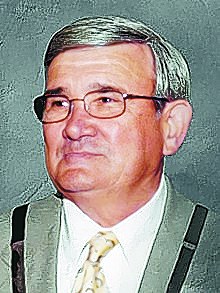 BORN
1935
DIED
2021
FUNERAL HOME
GEESEY-FERGUSON FUNERAL HOME,INC.
301 North Avenue F
Crowley, LA
A Mass of Christian Burial was held at St. Michael the Archangel Catholic Church for Donald Hilliard, 86, who passed away September 15, 2021, at home, where he found great peace surrounded by family and friends. Services were officiated by Fr. Mikel Polson, pastor of St. Michael the Archangel Catholic Church. Burial was held in Woodlawn Mausoleum. Donald was born August 17, 1935, to Francis and Dora Floyd Hilliard in Crowley. He worked at Lawco as manager for many years. Donald was active in the Crowley community on the planning commission, Rotary Club, International Rice Festival Board of Directors, and the Third Order of Lay Carmelites. Survivors are his daughter, Elaine Hearod; his son, Donnie (Monica) Hillard; his grandchildren, Haley Hearod, Ben Hearod, and Lindsey Hilliard; his sister, Delores Dugan; and close friend, Jose Beauchamp. He is preceded in death by his wife, Thera Methe Hilliard; his parents, Francis, and Dora Floyd Hilliard; one grandson, Todd Curtis Hilliard; and his brother, Finley Hilliard. One of Donald's greatest gifts was to make other people laugh, often entertaining with Cajun jokes and lively conversation to brighten their day, if only for a minute, with a smile and kind word. Many thanks to Dr. Satinder Saini, Dr. Chad Vincent, and Rachel Spoon. Condolences may be sent to family by www.geesey-ferguson.com. Arrangements have been entrusted to Geesey-Ferguson Funeral Home of Crowley.

Published by The Acadiana Advocate from Sep. 18 to Sep. 19, 2021.
To plant trees in memory, please visit the Sympathy Store.
MEMORIAL EVENTS
To offer your sympathy during this difficult time, you can now have memorial trees planted in a National Forest in memory of your loved one.
Funeral services provided by:
GEESEY-FERGUSON FUNERAL HOME,INC.
MAKE A DONATION
MEMORIES & CONDOLENCES
1 Entry
I was so sorry to hear about Donald Ray passing away. Please know that you all are in our prayers and thoughts.
Yvonne Floyd Duncan
Family
September 19, 2021
Showing 1 - 1 of 1 results