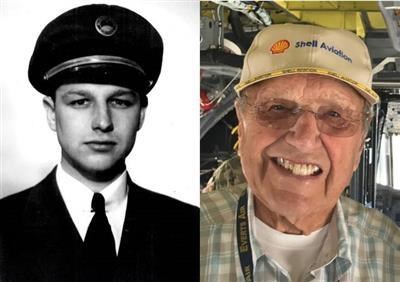 BORN
1922
DIED
2017
FUNERAL HOME
Fairbanks Funeral Home & Crematory, Inc.
3704 Erickson Avenue
Fairbanks, AK
Clifford "Cliff" Robert Everts, 95, passed away on Dec. 7, 2017, at home with family in Fairbanks, Alaska.
Cliff leaves his beloved wife of 59 years, Betty Everts; his daughters, Melanie Moyer, Debbie Baggen, Karen Wing, Vicki (Albert) Parrish and Susan (Don) Hoshaw; son, Robert (Paula) Everts; 16 grandchildren; 11 great-grandchildren; and so many close and cherished family and friends.
Born and raised in Yonkers, N.Y., the son of Julius and Julia Everts, who emigrated from West Germany, Cliff was the youngest of five children. He took his first airplane ride when he was 12 years old, often saying, "I couldn't get over that first ride." He started his flight training in a Taylorcraft when he was 15, and ultimately soloed before he had his drivers permit.
In December 1941, Cliff left home and signed up for the Civilian Pilot Training program to support the war effort, and in search of adventure through aviation. In the summer of 1942, he accepted a job with Alaska Star Airlines (now Alaska Airlines), as a co-pilot in Anchorage. He made it to Alaska in February 1943, with $78 in his pocket. Within weeks of arriving, he loved Alaska and believed that "people care about each other and you get to know people right away."
In 1944, Cliff moved to Fairbanks, Alaska, to become a flight instructor for Fairbanks Air Service and soon ended up working at Wien Airlines. He flew for Wien for 35 years (1945-1980), amassing over 30,000 flight hours, carrying mail, cargo and passengers throughout Alaska.
Cliff was an entrepreneur at heart. He dabbled as a restaurateur and motel owner, sold ice cream to village residents along his flight routes, purchased a gold mine, bought and sold military surplus, and built Airport Gas & Oil to serve residents and employees in the Fairbanks airport vicinity.
After retiring from Wien in 1980, Cliff committed his full attention to Alaska Rental & Sales and Everts Air Fuel. He built his business on the philosophy of providing the best service at the best price for his customers, regardless of what they were hauling - fuel, reindeer, building materials - or what they landed on - lakes, gravel bars, ice strips or airport runways.
Cliff was humble and appreciative of the honors and awards he received over the years. In October 2007, he received the Federal Aviation Administration (FAA) Master Pilot Award and, in September 2011, the Greater Fairbanks Chamber of Commerce dedicated the East Ramp entrance of the Fairbanks International Airport in his name. In 2012, the Alaska Air Carriers Association recognized him as an Aviation Legend and in 2013, he was inducted into the Alaska Aviation Hall of Fame, receiving the Alaska Aviation Entrepreneur Award. He was a longtime member of the Air Line Pilots Association, Aircraft Owners and Pilots Association, Pioneers of Alaska Igloo #4, Quiet Birdmen, Elks Lodge #1551 (past Exalted Ruler) and Fairbanks Chamber of Commerce (Transportation Committee).
When asked what Cliff was most proud of, a smile would spread across his face and he would say: "I am most proud of my family, just who they are and everything they do." When reflecting, he always gave full credit to his wife, Betty, and their six children for building an incredible life, and allowing him to pursue his aviation and business dreams for 75 years. His adventures, successes and, above all, commitment to his family are his legacy and, like the aircraft he loved so much, legendary.
A celebration of life will be held at 3 p.m. on Jan. 13, 2018, at the Westmark Fairbanks Hotel Gold Room. For questions, please contact Fairbanks Funeral Home at 907-451-1110.
Published by Anchorage Daily News from Dec. 17 to Dec. 18, 2017.
To plant trees in memory, please visit our Sympathy Store.
MEMORIAL EVENTS
To offer your sympathy during this difficult time, you can now have memorial trees planted in a National Forest in memory of your loved one.
Funeral services provided by:
Fairbanks Funeral Home & Crematory, Inc.
MAKE A DONATION
MEMORIES & CONDOLENCES
10 Entries
My condolences for the loss of your dear father, grandfather, great-grandfather and friend. Truly a blessing to have lived a very long and fulfilling life. May all of you continue to be blessed with his legacy and hold on to wonderful memories of times well spent. (1 Thess. 4:13, 14) Sincerely, Ali
January 9, 2018
Great auction bidder and true Alaskan,bidder number 95 will be retired in his honor. His stories and his work ethic will long be remember and truly missed. It was and will continue to be a honor to have known him.
Ron Alleva
December 31, 2017
It was always the high point in my day when Cliff would bound into my office at Everts with a newfound business opportunity I should look into. I was moved when he invited me to tag along to a QB meeting. The five years I spent at Everts were some of my best and most memorable Alaskan years.

I'll never forget Cliff's genuine kindness and generosity - a great inspiration.
Jim Brown
December 20, 2017
As the days and weeks pass, and as you return to life's routine, may you continue to feel comforted by the love and support of family and friends.
December 19, 2017
With our deepest sympathy to all the family. A true pioneer has left us but he does leave behind many wonderful memories for so many people. May you all find peace in those memories and know that he was proud of his family and would want you to all be happy.
Paul & Dianne Young
December 19, 2017
Dear family please accept my condolence and take courage, throw all your anxiety on the God of peace, he is near to all those calling on him Ps. 145:18
December 16, 2017
Dear Betty and family,
We were so saddened to read of Cliff's passing. What a wonderful man and what a lovely legacy he has left. Leo and I have you all in our thoughts and prayers. May God grant His peace that passes all understanding to you. Praying that your memories and love and support of family and friends help you through this sad time. Fairbanks has lost another true pioneer.
Leo and Jeanne Aguilar
December 15, 2017
I am so sorry for your loss. May you find comfort in the weeks and months to follow, from the loving promise of seeing our loved ones again in the near future (1Thessalonians 4:13,14). Please accept my deepest condolences.
December 14, 2017
Dear Betty, Melanie, Debbie, Karen, Vicki, Susan and Robert and all the spouses, grandchildren and great-grandchildren. I am so sorry to hear of Cliff's passing and remember fondly the last times I visited with your family, once riding from Harding Lake to Fairbanks with Cliff and him telling me along the way about his career in aviation and how he had gotten started. My memories of babysitting for your family in the 60s are still vivid, especially frying eggs for Debbie at 2:00 a.m. on New Year's Eve, as well as some of my mom's stories about Betty from when they worked together at the law firm. May your wonderful memories of Cliff and his very full life sustain you in this very sad time.
Nancy Boddy
December 14, 2017
Offering our deepest condolences during this difficult time.
Fairbanks Funeral Home & Crematory
December 17, 2017
Showing 1 - 10 of 10 results