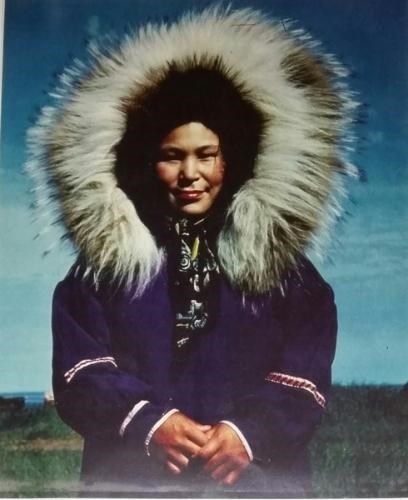 BORN
1926
DIED
2015
FUNERAL HOME
Janssen's Evergreen Memorial Chapel - Anchorage
737 E Street
Anchorage, AK
Florence Nayauk Ahlalook Nagozruk, 89, passed away on Nov. 29, 2015, in Anchorage, Alaska. A visitation will be held at Janssen's Evergreen Memorial Chapel, 737 E Street in Anchorage, at 11 a.m. on Saturday, Dec. 12, 2015, with service and potluck to follow at 12 p.m. Burial will be at 2 p.m. She was born on April 23, 1926, in Pt. Barrow, Alaska, to Margaret Autloakshoak Ahlalook and Ralph Ahlalook. Her sisters are Catherine Tuckfield, Dorcus Okamailuk, Esther Toomey and Sarah Panik; and her brothers are Samuel, David, Billy, Allen, Jonathan, James, Ronald and Timothy. Florence grew up in a time when her family slept on reindeer skin mattresses. Their pillow covers were flour sacks whitened with Clorox and filled with duck feathers. They used kerosene lamps and heated with coal and willows. Their sustenance came from the land and traditions were strong. She fondly remembers when her father would use skis and pull her on a sled. She completed school to the 8th grade. Florence had an incredible memory for details of events that occurred. Florence was 9 years old, on Aug. 14, 1935, when Wiley Post and Will Rogers landed at their camp at Walakpa, and spent the night. She and her family witnessed the plane crash into the water. In 1940, her father, Ralph, moved his family by dogteam to Wainwright, Alaska. On May 6, 1950, she married school teacher, Arthur Nagozruk Jr. Doctor Harold W. Griest officiated. They had six children: Sharon Jane (who died at birth), Arthur III, Sharon Elizabeth McClintock, Barbara Florence Chmiel, Walter Ralph and Karen Laura Desalernos. Florence went with her husband to remote rural Alaska villages. She helped to move the people of Elephant Pt. to Buckland after the flood of 1951. They taught in Buckland, Solomon and Pt. Lay. She taught sewing classes, baked, sewed all the family's parkys and mukluks and gathered and put away subsistence foods. She loved her children unconditionally and was always thankful for everything. The family settled in Nome in 1960, where she resided until 1997, to live with her daughter Sharon in Eagle River, Alaska. She then resided at Randel House, where she was lovingly cared for until her death. Florence is survived by her brothers, Allen (Dorothy) and Timothy Ahlalook; sisters, Dorcus Okamailuk and Sarah Panik (Peter); children, Sharon Elizabeth McClintock (Bill), Barbara Florence Chmiel (John) and Karen Laura Desalernos (Dano); grandchildren, Josie Wilson, (Steve), Monique Chmiel (Gorby), Sara Johnson (Paul), Elizabeth Silvernale (Kevin), Erin Ballantyne (Kelly), Billy McClintock and Julianna Moeller; and great-grandchildren, Eliza and Natalie Hagstrom, Mailey and Sara Gorbulev, Alvanna and Levi Ballantyne, Dorothy Johnson and Todd Silvernale. She was preceded in death by her husband, Arthur Nagozruk Jr.; son, Arthur III; son, Walter; and daughter, Sharon Jane. Arrangements are with Janssen's Eagle River Funeral Home.
Published by Anchorage Daily News on Dec. 8, 2015.
To plant trees in memory, please visit the Sympathy Store.
MEMORIAL EVENTS
To offer your sympathy during this difficult time, you can now have memorial trees planted in a National Forest in memory of your loved one.
Funeral services provided by:
Janssen's Evergreen Memorial Chapel - Anchorage
MAKE A DONATION
MEMORIES & CONDOLENCES
11 Entries
So sad to hear. Her and her son Art was our neighbors down the street my kids love them.
Alicia Iyatunguk
December 12, 2015
Years ago Florence made beautiful Eskimo dolls and sell them to the ivory shop I was working in. One day someone came in and wanted some gifts to give to President Carter when he visited Anchorage, Alaska. A couple of days later there was a big picture in the Anchorage paper of the President and his family boarding the Air force one and there was little Amy holding that doll Florence had made. My Love to the family.
Leon Boardway
December 10, 2015
May the Lord comfort the daughters and relatives of Florence. I have fond memories of delivering her freshly gathered food that was in season. We were friends and I missed her when she left Nome. She will be remembered always.
Mary Miller
December 10, 2015
Concolences and comforting prayers for all who are mourning Florence. She is dancing in heaven with all who have passed on before her.
Pic Lee
December 10, 2015
My deepest sympathies are with you all as you mourn the loss of your dearly beloved Florence. May the prayers of family and friends surround you with loving comfort during this time of need.
Lori Waghiyi
December 9, 2015
Prayers and condolences for everyone.
Winton Weyapuk Jr.
December 9, 2015
Sending condolences n prayers from my Mom, Maggie Komonaseak and her entire family♡
Carrie Koenig
December 9, 2015
Our Condolences and Prayers are with the family. May God continue to comfort you.
Rosenda Reed
December 9, 2015
Dorean (Dorygozruk) Duhaylongsod
December 8, 2015
My Grandmother loved well and was well loved. I fondly remember a time that Aana took a harmonica with her to a doctor's appointment and played a song for the (surprised!) doctor.
Erin Ballantyne
December 8, 2015
I am sorry for your loss. May the hope of seeing your dear loved one again in paradise ease the sorrow of your hearts.