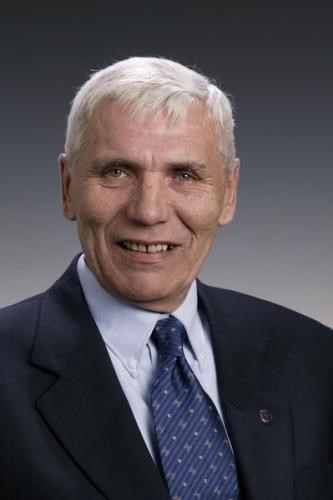 BORN
1939
DIED
2015
Hjalmar "Ofi" Olson passed away early in the morning on July 2, 2015. Ofi was born on Oct. 24, 1939, at Kanakanak, to Hjalmar and Mary Olson and was the eldest of eleven children. He was a lifelong commercial salmon fisherman and an avid pilot who spent many years hunting, fishing and trapping in Bristol Bay. Ofi earned his private pilot's license in 1957, at the age of 16. He served 22 months in Germany, returning to Dillingham, Alaska, in 1961, as a proud veteran of the United States Army. In 1964, Ofi met Anuska Hansen and they married in 1968. They had three children: Kathy, Eric, and Theodore Olson and were blessed with five grandchildren: Erica Ann and Jason Kelly, Justin Dye and Erica and Erin Olson. In 1974, while living in Koliganek, Alaska, Charlie Nelson selected Ofi to represent the community on the Bristol Bay Native Corporation board. That led to four decades of distinguished service including 29 years as the board chairman. In 2009, he retired as the President, CEO and Chairman of the Board. Ofi served in many other capacities on numerous boards and commissions during a lifetime of dedication to the betterment of Bristol Bay and its people. Ofi was preceded in death by his parents, Hjalmar and Mary Olson; wife, Anuska Olson; daughter, Kathy Olson; granddaughter, Erica Ann Olson; siblings, Thomas (first born), Andrew, Eric, Lorna and Thomas (second born). He is survived by sons, Eric and Theodore; and grandchildren, Jason, Justin, Erica and Erin. Funeral services will be held in Dillingham on Aug. 1, 2015, and he will then be laid to rest next to his wife at the Kanakanak Cemetery.
Published by Anchorage Daily News on Jul. 29, 2015.
To plant trees in memory, please visit the Sympathy Store.
MEMORIAL EVENTS
To offer your sympathy during this difficult time, you can now have memorial trees planted in a National Forest in memory of your loved one.
MAKE A DONATION
MEMORIES & CONDOLENCES
7 Entries
I am so happy to say that you were my brother. I miss you so much and your daily phone calls. You accomplished quite allot in your life. I wished you could've lived longer. I know you are not suffering any more. You are now with your loved ones, in a better place.
Your Loving Sister, Hilda Kroener
August 10, 2015
RIP Ofi RIP-Eric & Teddy our prayers and condolences to you and our love. Massa, Marie, Macrina and Nathaniel.
Massa Pat
August 3, 2015
Amelia,Sherri and Ofi's family.We are so sorry for your loss our prayers are with you.Take care and God be with you.Memory eternal Josie and Johanna
Josephine Savo
August 2, 2015
Love & prayers. Ofi will be greatly missed, what an amazing man with such a big heart for our people. I'm very thankful to have known him and everything he had done for our Native people. He will be in our hearts for ever.
Sadie & Family
July 29, 2015
So sorry for your lost, i pray that the "God of all comfort" help you during this difficult time 2Cor1:3
July 29, 2015
Eric, Teddy, Grandchildren and siblings, we are remembering life long family friends in our prayers at the loss of good man! Ofi would always take the time to talk to anyone that was around him. I will always cherish the memory of having him and his wife Anuska in my life, and thank the Lord that we have his children and many family members still a part of our lives. God be with you all at this time and in the time to come.