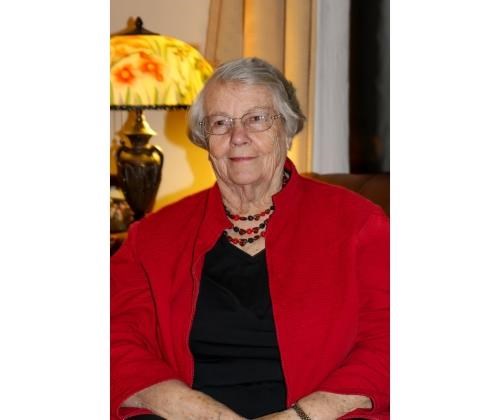 BORN
1934
DIED
2019
FUNERAL HOME
Janssen's Evergreen Memorial Chapel - Anchorage
737 E Street
Anchorage, AK
Myrna M. Maynard passed away on April 18, 2019. She was born in Johannesburg, South Africa, on Sept. 6, 1934, to William and Gertrude James. She had a wonderful childhood in Edenvale, South Africa, tormenting and being tormented by three older brothers. She also had two older sisters. In 1948, she spotted a young man riding a bicycle by the school bus and told her friend that she was going to marry him. After years of scheming and plotting, she did marry that cyclist, the love of her life, Kenneth D. Maynard, on Feb. 4, 1956. They moved to Empangeni, a farming town in Zululand, for a year, but returned to Johannesburg to have their first child, Colin. They soon added a daughter, Vivien.
In 1960, they decided to leave South Africa, and chose Anchorage, Alaska, based on the recommendation of Ken's brother, who had moved there four years previously. Ken came first in October 1960, while Myrna and the children followed in February 1961. She was not impressed at first or second looks. She was used to playing tennis outdoors three times per week and attending cultural events featuring premiere European performers, none of which were available in Anchorage in the early 1960s. She wondered why Ken had brought her to this "god-forsaken" place.
After working for Northern Consolidated Airlines and International Building Supply, she settled in as the office manager of Ken's architectural firm. When not at work, she concentrated on her children and volunteering for various groups. She found political volunteering to be right up her alley, starting with Sen. Ted Stevens' first campaign in 1968. Her interest in politics and her desire to vote led her to become a United States citizen in 1985. Even before her citizenship, she was vocal in her praise and chastising of government officials, receiving a proclamation from Mayor Knowles regarding her "verbal vigilance" on her 50th birthday.
She went to work for Rep. Drue Pearce in the Alaska State House, as a legislative aide, in 1988. She didn't like being away from Ken for four to five months, so she went back to work for him. Eventually, Sen. Pearce lured Myrna back to Juneau, when Drue was Senate President, to be the "stone wall at the front door." Myrna then worked for Rep. Gail Phillips when she was Speaker of the House, and ended her legislative career with Rep. Carl Morgan.
Myrna then started assisting legislative candidates with their APOC reports and became close to several of them. This assistance came with giving advice, wanted or not, and scolding them when they did something of which she did not approve. This also applied to Rep. Don Young, on whose campaign she worked from 1994 to 2010. She always said that she didn't want anything from them, so they couldn't do anything to her. Her last campaign was doing the FEC reports for Sen. Dan Sullivan and, with Ken as her assistant, they entered thousands of checks into the database. Her long history of volunteerism recently earned her the title "Saint of the Republican Party."
Myrna spent the last few years of her life enjoying time with Ken, her children and grandchildren. She spent many hours watching planes taking off at Point Woronzof, birds at Potter Marsh, Jeopardy, and just going for a drive to find moose or to see how the city had changed. She still found time to impart words of wisdom to those in office, or those for whom she had worked.
She was preceded in death by her parents; sisters, Winnifred and Flora; and brothers, Ken and Desmond. She is survived by her husband, Kenneth; brother, Robert; children, Colin Maynard (Pattie) and Vivien Noll (Neil); grandchildren, Douglas Regan and Melanie Regan; three great-grandchildren Wyatt, Holton and Sorrel Beckman; and many cousins and in-laws.
A celebration of Myrna's life will be held at the Petroleum Club of Anchorage on Friday, April 26, 2019, at 5 p.m. In lieu of flowers, the family requests donations to Abused Women's Aid In Crisis.

Published by Anchorage Daily News on Apr. 23, 2019.
To plant trees in memory, please visit the Sympathy Store.
MEMORIAL EVENTS
Apr
26
Celebration of Life
5:00p.m.
Petroleum Club of Anchorage
AK
Funeral services provided by:
Janssen's Evergreen Memorial Chapel - Anchorage
MAKE A DONATION
MEMORIES & CONDOLENCES
14 Entries
Our condolences to Ken, Colin and Vivian. We are sad to hear of Myrna's passing. You are in our prayers.
Fred and Ruby LaCasse
April 30, 2019
My sincere condolences to the family. May the God of comfort give you the strength and endurance to help you cope with the lost of your love one.
April 29, 2019
Will miss you Myrna!! You were a tough lady with a huge heart!! Rest in peace!
Julie Tisdale
April 26, 2019
With our love, Dan and Melinda
April 26, 2019
Myrna was a joy. She will be missed by all of us who knew and worked with her over the years. Great Lady!
Jim Palmer
April 25, 2019
I am extending my condolences to the family and friends. May all of you find
peace in knowing that God cares and will help you during these difficult times. 1 Peter 5:6,7*
Barbara Sutton
April 25, 2019
So sorry for your loss. May God give you strength to endure your loss.Sincere condolences.
Virginia
April 25, 2019
Maynard family, it was such a pleasure taking care of Myrna in the ICU...... Such a difficult situation and my heart goes out to your sweet family. I sure enjoyed seeing each of you around and getting to know you. What a beautiful tribute and it was nice to hear more about this Firecracker of a woman. What a legacy!
Kaylee Jenkins
April 25, 2019
Wish we could be there to offer our prayers and hugs in person..Will remember Myrna as a loving and caring Mom, Grandmother and Great-grandmother...Carolyn Regan-Medlock and Jerome Medlock
Carolyn Medlock
April 23, 2019
Dear Ken, Colin, Vivien and Family,
I was so sad to hear of dear Myrna's passing ... your family was so much a part of my childhood and growing up . I loved visiting my dad at work at the old 2 buildings on F street and then Maynard & Partch Architects new building at 800 F Street .... Myrna always welcomed us kids with a hug and a smile and I can hear her voice now . I still think of you all when I drive by and still feel like that's our building ... Myrna was so gracious and hosted my bridal shower 28 years ago and she was such an amazing hostess and gave so much to the community as well as her family and friends . Sending you a great big hug Ken and again I'm so sorry .... Myrna will not be forgotten !
❤Jennifer Partch-Briske & Family
Jen Partch-Briske
April 23, 2019
Ken,
Suzanne and I were saddened to learn of the passing of Myrna.We always enjoyed her friendship. She made a real contribution to Alaska.She will be sorely missed.
Suzanne and Leroy Barker
Portland, Oregon
Leroy Barker
April 23, 2019
Please accept my heartfelt condolences on the death of your dear love one may God give you strength to endure this most difficult time of your live please read John 6:40
April 23, 2019
I loved Myrna. She always brought a smile to my face. She was such a warm, welcoming presence and will be missed. So very sorry that you've lost your lovely Myrna, Ken and Colin.
Diane Kaplan
April 23, 2019
Dear family and friends,Im so sorry for your loss. May you all draw close to God in knowing that God is the creator of life. He is capable of restoring life to someone who has died.Acts 17:24,25
K.L
April 22, 2019
Showing 1 - 14 of 14 results