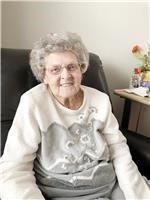 BORN
1921
DIED
2021
Marguerite (Peggy) Nielsen Rye Paynter passed away on Wednesday, September 22, 2021 at the Washington County Nursing Home in Akron, Colorado. Peggy was born June 14, 1921 in West New York, New Jersey. She was the seventh child of seven children of Hans Christian Rye and Wilhelmina Carolina Nielsen Rye. She grew up in Princeton Junction, New Jersey, where she was baptized into the Lutheran Church. She graduated from Princeton High School.
On March 2, 1943, Peggy married William Brown Paynter, Jr. at All Saints Eben-Ezer Lutheran Church in Brush, Colorado. Bill and Peggy raised three children, living in New Haven, Connecticut; Brush, Akron and Sterling, Colorado.
Being a very creative person, she enjoyed: quilting, knitting, growing roses, making intricately decorated sugar Easter eggs and making Christmas stockings for her children, grandchildren and great-grandchildren. For several years, Peggy owned and operated Peggy's Ceramic Shop in Akron, where she enjoyed helping people with their various ceramic projects. She also enjoyed helping Bill occasionally at his law office. Her favorite occupation was being a homemaker. She especially loved entertaining friends in her home, and entertaining her family for the holidays. She delighted in making Danish goodies for her family, including Kjleners (Danish Christmas cookies) and Aebleskivers (Danish pancakes).
Peggy and Bill loved traveling around the world with the University of Colorado Buff Club, seeing the sites, and making new friends. Many restful days were spent at their cabin in Estes Park, frequently entertaining family and friends, and going to CU football games. After Bill retired, they lived at their cabin, enjoying just watching the snow fall, and admiring the visiting deer and elk.
Peggy belonged to several bridge clubs throughout the years. She and Bill played Couples Bridge with their friends in Akron, driving from Sterling every month back to Akron just to play bridge and visit. Peggy also belonged to Eastern Star, P.E.O., Prince of Peace Episcopal Church in Sterling, and St. Bartholomew's Episcopal Church in Estes Park.
Peggy was preceeded in death by her beloved husband, Bill; her parents, Hans and Mina Rye; her three brothers; three sisters; and one half-sister, and their spouses.
She is survived by her three children, Bill III and wife Sue of Scottsdale, Arizona, Marguerite (Peggy Ann) Grace Cummings and husband Wendell of Sedalia, Colorado, and Roxann Hall and husband Terry of Wellington, Colorado; one sister-in-law, Florence (Floss) Paynter Beck of Oxnard, California; seven grandchildren, Kirsten Paynter, Bill Paynter IV and wife Liz, Matt Paynter and wife Jacquie, Kelly Hansen and husband Mason, Vanessa McCracken and husband Frank (JR) , Mike Hall and wife Erica, Eric Hall and wife Angela; 14 great-grandchildren; and four great-great grandchildren.
Peggy celebrated her 100th birthday on June 14, 2021 at the Washington County Event Center in Akron with 80 family members and friends. Private services will be held in Estes Park at a later date.
Published by Akron News-Reporter on Sep. 30, 2021.
To plant trees in memory, please visit the Sympathy Store.
MEMORIAL EVENTS
To offer your sympathy during this difficult time, you can now have memorial trees planted in a National Forest in memory of your loved one.
MAKE A DONATION
MEMORIES & CONDOLENCES
2 Entries
Your mother absolutely lived a full life. I'm sure you'll find comfort and peace in all of those special memories you have in your heart.
Vickie (Goodman) Kling
Other
October 11, 2021
So so sorry to hear about Peggy passing away. I'll never forget the fun times I had as a child running in and out of the house. Claiming Roxanne as my baby because she too was born on Aug. 4th. I still have old furniture that she passed on to Myrtle, my mother and still to this day just love them. I'm sorry Bill, Peggy, Roxanne, you will miss her greatly. Thanks for the Memory's Hugs to all
Barbara Sunde Butler
Friend
October 2, 2021
Showing 1 - 2 of 2 results