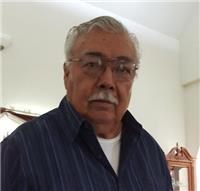 BORN
1935
DIED
2021
FUNERAL HOME
Rosas Funeral Home Inc
1215 W Front St
Alice, TX
Emilio Medina – 86 years of age passed away on Wednesday August 18, 2021, at his residence. He was born on August 8, 1935, in Kennedy, Texas to Gabriel and Apollonia C. Medina. Emilio worked for many years in road construction and was known as a master of his trade. He served his country having served in the United States Army.
Emilio was married to his wife Dolores for 24 years. They were inseparable and had a total Admiration for one another. His joy was his family and grandchildren. He enjoyed serving the Lord and looked forward to Sunday church service, where he participated as an usher and singing to the Lord. He also enjoyed football games and watching the Houston Oilers and then became a fan of the Houston Texans. He could be found at any given day watching a good Western movie or sitting at his kitchen table writing and singing Christian Hymns. He was always ready for a box of churches Chicken and to crack silly Jokes.
Emilio is preceded in death by his parents, two sons Javier Medina and Jon Paul Medina, siblings Santos Davila, Jose Angel Medina, Gabriel Medina, Ramon Medina and Gilberto Medina.
Survivors include his loving wife of 24 years of marriage Dolores C. Medina of Alice, Texas, Two daughters Cynthia Ann (Ray) Perez of Spring, Texas, Carla (Juan) Zambrano of Alice, Texas, one step son Samuel (Jennifer) Vinton of Alice, Texas, Texas and one step Daughter Crystal (Mark) Vinton of Alice, Texas, two brothers Juan Medina of Alice Texas and Guadalupe (Maria) Medina of Rosenberg, Texas and one sisters Maria(Billy) Lilly of Springs, Texas one sister in law Zenaida Medina Frisco, Texas 15 grandchildren 5 Great grandchildren and numerous nieces and nephews.
Family will receive friends and relatives at 2:00 P.M. on Saturday August 21, 2021, at Rosas Funeral Home. Funeral service will be conducted at 3:00 P.M. that same afternoon. Military honors will be presented at the end of the services by the United burial association.
Rosas Funeral Home entrusted with arrangements.
Published by Alice Echo News-Journal from Aug. 21 to Aug. 28, 2021.
To plant trees in memory, please visit the Sympathy Store.
MEMORIAL EVENTS
To offer your sympathy during this difficult time, you can now have memorial trees planted in a National Forest in memory of your loved one.
Funeral services provided by:
Rosas Funeral Home Inc
MAKE A DONATION
MEMORIES & CONDOLENCES
Sponsored by Rosas Funeral Home Inc.
0 Entries
Be the first to post a memory or condolences.