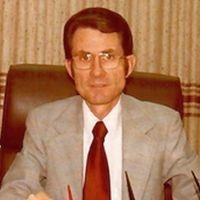 FUNERAL HOME
Mulkey-Mason Funeral Home - Lewisville, TX
740 S. Edmonds Lane
Lewisville, TX
Murrell G. Latimer
Murrell G. Latimer, a longtime Amarillo businessman, passed peacefully from this life on June 12th at the age of 93 at his home in Flower Mound, Texas after a courageous battle with stomach cancer.
Graveside services and burial with military honors will be held at the Dallas-Ft Worth National Cemetery on Wednesday June 23rd at 11am with Pastor Ken Rogers of Lewisville Bible Church officiating.
Mr Latimer was born in 1928 to Vernon and Maybell Latimer living in Matador, Texas. He served during World War II in the US Navy and attended West Texas State College after completing his service to the country. While at West Texas State, Murrell received his BBA degree and met his wife Belle Jones who he married in 1949. He would spend the next 71 wonderful years at her side. She cared for him unwaveringly in their home through the last days of his life.
Murrell Latimer was a distinguished Amarillo businessman founding Time Chemical and Janitor supply in 1958 with a $290 loan from the American National Bank. He passionately led Time Chemical and Janitor Supply for 34 years enriching the lives of his associates and customers, both of which he cherished. He was a faithful member of Rotary East for over 25 years supporting the Amarillo United Way, Faith City Mission, Life Challenge, Salvation Army, and all activities that promoted Amarillo.
Murrell and Belle were active at Washington Avenue Christian Church and early members of Paramount Terrace Christian Church. Murrell was a Deacon, Elder, Sunday School teacher, youth sponsor, and the Sunday School Superintendent.
After selling Time Chemical and retiring in 1993, Murrell and Belle moved to Flower Mound a few years later to be closer to their children and grandchildren. Murrell was a dedicated believer and follower of Jesus Christ. He spent many years of his retirement writing Bible messages and sharing them with others so that they might be saved and live forever in heaven. He and Belle have been steadfast supporters of the Lewisville Bible Church fellowship since moving to Flower Mound.
Murrell was a loving husband, father, and grandfather and will be deeply missed.
He is survived by his wife Belle, son Scott Latimer and his wife Kim, grandson Preston Latimer, grandson Ryan and his wife Shannon, and great grandson Parker, along with numerous special nieces and nephews.
In lieu of flowers the family suggest memorials be made to Lewisville Bible Church or Gideons International to help spread the word of Christ.
Published by Amarillo Globe-News from Jun. 21 to Jun. 22, 2021.
To plant trees in memory, please visit the Sympathy Store.
MEMORIAL EVENTS
Jun
23
Graveside service
11:00a.m. - 11:45a.m.
Dallas/Fort Worth National Cemetery
2000 Mountain Creek Parkway, Dallas, TX
Funeral services provided by:
Mulkey-Mason Funeral Home - Lewisville, TX
MAKE A DONATION
MEMORIES & CONDOLENCES
2 Entries
Dear Belle, Fondly remembering you and your husband as Sunday school teachers at Washington Avenue. May God bless your family with many happy memories. Love in Christ, Cinda and Lelan Callaway
Cinda Lott Callaway
June 21, 2021
Dear Belle ,You and Murrell were one of the first members I recall from WACC. So many years ago Thank you for the lovely memeries,beginning 1956. Now Bess @ 98 ,from my chair, First Baptist TV. Cinda jo and Wendell
Bessie Lott
June 21, 2021
Showing 1 - 2 of 2 results