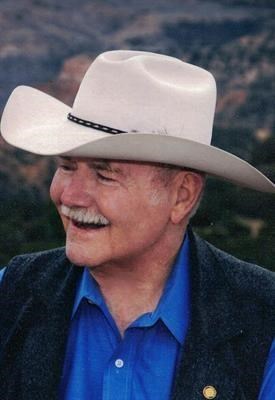 Services will be at 10:00 a.m., Wednesday, May 30, 2018, at First United Methodist Church, Claude with the Rev. George Price, District Superintendent, Abilene officiating. Masonic rites are provided by Claude Lodge No. 719. Arrangements are by Boxwell Brothers Funeral Directors, 2800 Paramount Blvd.

Tom was born November 27, 1931, on the Figure Three Ranch to William Terrill and Frances Christian. He graduated from Claude High School in 1949. Tom graduated from West Texas State College and was a member of the varsity football team and a member of the United States Naval Reserve. His college career was interrupted by two years in the U.S. Navy where he served in the Ceremonial Guard stationed in Washington D.C. which participated in the inaugural ceremonies of President Dwight D. Eisenhower.

Tom married Anne on March 12, 1958, in Perryton, Texas, and soon they established their home on the Figure Three Ranch southwest of Claude where he worked and later bought the family ranch. Soon after moving home Tom established Palo Duro Shooting to allow hunters from throughout the U.S. the opportunity to hunt Aoudad sheep and Mule Deer in the canyon. He often bartered hunting rights for items that his growing family needed, such as band instruments and construction projects around the house. Tom was an active civic leader who remained devoted to community service throughout his lifetime. He was a member of the Texas Legislature from 1968 - 1972, having the distinction of being the first Republican to defeat an incumbent Democrat in a state level office race since reconstruction, was a past member of the West Texas State University Board of Regents, Panhandle Livestock Association, Panhandle-Plains Historical Society, Board of the Outdoor Drama "Texas", Tri-State Fair Board, Past President of the Claude School Board, Claude Lions Club and Claude Medical Center. He was recognized by West Texas A&M University as a distinguished alumni.

Tom was instrumental in providing health care services to residents of rural communities as one of the organizers of Armstrong County Medical Center, which was later known as Claude Family Medical Clinic, and Tom volunteered with that organization from 1965 until 2009 when it was sold.

He attended First United Methodist Church in Claude, where he and Anne raised their children focusing on Christian values, education and community service. He was a 65 year Mason in Claude Lodge 719, he was also a York Rite Mason, Scottish Rite Mason and a Shriner where he was a 63 year Noble.

Along with ranching, Tom worked as a cattle inspector for First National Bank in Amarillo, was President of the First National Bank in Claude, interim director of the Panhandle-Plains Historical Museum, and wound up his varied career, along with Anne starting Cowboy Morning, which fed thousands of tourists annually on the northern edge of the Palo Duro Canyon.

In lieu of flowers, memorials may be sent to Claude Masonic Lodge #719, P.O. Box 643 Claude, Texas 79019 for scholarships to be awarded to graduating seniors or the Shriners Hospitals for Children % Khiva Shrine 305 E 5th Amarillo, TX 79109. Please sign the online guestbook at www.boxwellbrothers.com.
To plant trees in memory, please visit our Sympathy Store.
Published by Amarillo Globe-News from May 30 to May 31, 2018.
MEMORIAL EVENTS
No memorial events are currently scheduled.
To offer your sympathy during this difficult time, you can now have memorial trees planted in a National Forest in memory of your loved one.
Funeral services provided by:
Boxwell Brothers Funeral Directors - Amarillo
MAKE A DONATION
Please consider a donation as requested by the family.
MEMORIES & CONDOLENCES
5 Entries
Tom Christian was a legend in Armstrong County. So much history involves his name. He will be grestly missed. Prayers for healing and peace for those mourning his passing.
May 31, 2018
Rit and Shay you and your family are in our thoughts and prayers.
Marguerite Yow
May 31, 2018
I am so sorry for the loss of your loss of your loved one. Please find peace and comfort in Psalms 119:76.
May 30, 2018
may your memories of the wonderful times that you shared with your loved one bring comfort to you and youe loved ones at this difficult time my condolences Isaiah 61&2
May 27, 2018
May the God of all comfort grant you peace during this time. Phillipians 4:7 says, ...and the peace of God that surpasses all understanding will guard your hearts.
Michelle
Neighbor
May 27, 2018
Showing 1 - 5 of 5 results