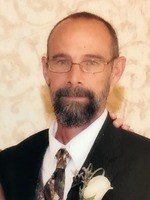 ABOUT
Ames High School
Douglas Robert Howell
Douglas Robert Howell of Sheldahl, Iowa joined other departed hunters and fishermen on January 4, 2021 at the age of 55. Doug grew up in Ames, Iowa, and graduated from Ames High School before serving his country in the US military for 4 years, after which he became a certified diesel mechanic. Doug married the love of his life Theresa (Zandarski) Howell on October 4, 2013. Doug was an outgoing, kind person who was well liked by everyone he met. He had a great sense of humor and was always doing things for others, whether it was helping a neighbor cut down a tree, fix a vehicle or build something. Doug loved to hunt, fish, and go camping with his best friends and spend time with his other buddies at his cabin on Big Wall Lake. He enjoyed spending time with the extended Howell family at reunions and pig hunts, in addition to hunting trips with his friends for big game in Colorado. He cherished trips to Canada with his father, brother, nephew and friends to fish for big round eyes, and was known to have an occasional "Natty Light". We were all better off when Doug was in the world, and he will be greatly missed. Doug is survived by his wife Theresa (Zandarski); parents Frank and Nina Howell of Ames, IA; his brother Steve (Natalie) Howell of Kearney, MO; his nephew Logan (Danielle) Howell of Kansas City, MO and niece Courtney Howell of Orlando, FL.
An open house Celebration of Life will be held on June 12, 2021 from 2-5 p.m. at a friend's farm located at 55850 170th St., Ames, Iowa 50010. Please dress for comfort. Doug will be placed in his final resting place at the VA Memorial Cemetery in Van Meter, Iowa at a separate ceremony for immediate family only. We would like to encourage friends to post memories, stories, and photos at Doug's memorial page https://www.mykeeper.com/profile/DouglasHowell/ or his Facebook page.
Published by Ames Tribune from Jun. 2 to Jun. 3, 2021.
To plant trees in memory, please visit the Sympathy Store.
MEMORIAL EVENTS
Jun
12
Celebration of Life
2:00p.m. - 5:00p.m.
at a friend's farm
55850 170th St., Ames, IA
MAKE A DONATION
MEMORIES & CONDOLENCES
0 Entries
Be the first to post a memory or condolences.