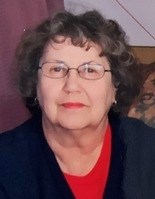 BORN
1936
DIED
2021
FUNERAL HOME
Grandon Funeral and Cremation Care
414 Lincoln Way
Ames, IA
Helen Opperman
Ames - Helen Opperman, 85, of Ames, was reunited with her husband on May 26, 2021. Funeral services for both Helen and Richard will be June 12, 2021, at 2:00 p.m. at Stonebrook Community Church, 3611 Eisenhower Ave, Ames, IA 50010 with a public visitation held one hour prior to services.
Helen was born in Nevada, Iowa to Hans and Leota (Ingerson) Hohn on March 31, 1936. Helen spent her early years in Nevada, Iowa and was a graduate from Nevada High School with the class of 1952. Helen was a natural mother; in her early years she would help take care of her siblings and that early training helped to make her a fantastic mother to her children later in her life.
Helen enjoyed making silk flower arrangements and was always on the lookout for interesting baskets and other containers to use for one of her arrangements. Each year she made arrangements for family graves on Memorial Day and occasionally would also lend a hand to budget minded brides with wedding flowers. It truly was her creative outlet.
Helen will be missed by her, children; Doug (Terri) Opperman, and Vicki Jones, grandchildren; Joshua (Lexi) Opperman, Nicole (Fred) Weiss, Kristen Opperman, Katelyn Opperman and Melissa Aymond, great grandchildren; Aubrey, Avery, Lelah and Kenny. Helen is preceded in death by her parents Hans and Leota, husband Richard who had passed on April 30, 2021 sons, Scott Opperman in 2002, and Bruce Opperman in 1959.
Online condolences may be directed to: www.grandonfuneralandcremationcare.com
Published by Ames Tribune from May 28 to Jun. 3, 2021.
To plant trees in memory, please visit the Sympathy Store.
MEMORIAL EVENTS
Jun
12
Visitation
1:00p.m. - 2:00p.m.
Stonebrook Community Church
3611 Eisenhower Avenue, Ames, IA
Jun
12
Funeral service
2:00p.m.
Stonebrook Community Church
3611 Eisenhower Avenue, Ames, IA
Funeral services provided by:
Grandon Funeral and Cremation Care
MAKE A DONATION
MEMORIES & CONDOLENCES
Sponsored by Grandon Funeral and Cremation Care.
2 Entries
Dear Vicki and Doug and families,
I am so sorry to hear about your Mom passing. I know she and your Dad are together now in death for eternity. I remember your Mom, so sweet and caring. We would talk for hours when I would come over when I worked for John Hancock. I remember her well and pray for the repose of her soul. May our Lord Jesus wrap His loving arms around all of you who grieve and comfort you in the days to come.
Hugs, love and prayers,
Cindy and Jim Holkup
Cindy Holkup
Friend
June 1, 2021
What a lovely lady. We worked together for 9 years. My husband and I had a great time with her and Dick. Merories were made and I will always remember them fondly.
Elaine Clark
Friend
June 1, 2021
Showing 1 - 2 of 2 results