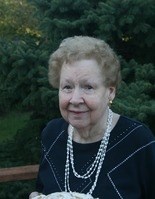 FUNERAL HOME
Palmer & Sons Funeral Home Inc
1016 Church St
Gowrie, IA
Marjorie Jeanne (Lizer) Burkgren
Ames - Marjorie Jeanne (Lizer) Burkgren, 92, of Ames, IA, formerly of Gowrie and Dayton, IA, passed away at her home on Sunday, May 30, 2021 with her children by her side. Private family graveside services will be held on June 2, 2021 at the Gowrie Township Cemetery with Pastor Mark Godfrey. The Palmer & Swank Funeral Home is in charge of arrangements. In lieu of flowers, memorials may be left to the Dayton Public Library.
Marjorie was born on January 18, 1929 in Carroll, IA to Blanche M. (Teeples) and Zeb Lizer. She grew up in Gowrie and graduated from Gowrie High School with the class of 1946. On January 18, 1948, Marjorie was united in marriage with Calvin E. Burkgren at the Gowrie Methodist Church. They made their home in Dayton and later on the family farm west of Dayton. They were the parents of three children, John Calvin, Marta and Tom. Marjorie worked in the office of the family business, Lizer Livestock Auction, from a young age, farmed with Calvin, raised sheep and was a farm manager. She was active in her church and community, serving on the Emanuel Lutheran Church Council, the LCW board, the Dayton Public Library Board, the board of the Dayton Women's Club and as a 4-H leader. In 2000, she moved to Ames after Calvin's death. Marjorie was known for her wonderful baked goods, which she often shared with family and friends. In 1991, she won the cinnamon roll contest at the Iowa State Fair. Most importantly, Marjorie was a wonderful wife, mother and grandmother who loved her family. To quote from "The Kitchen Front" "She fed us with her wisdom Nourished us with her joy Strengthened us with her love". Her family, friends and favorite dogs will miss her.
Marjorie is survived by her daughter Marta Burkgren (husband Ron Morgan) of Ames, her son Tom Burkgren (wife Sue Kimpston) of Perry, her grandchildren Meridith (Jeff) Burkgren Morgan Sandlin, Timothy Burkgren Morgan, Kay Kimpston-Burkgren and Joel (Miranda Ayers) Kimpston-Burkgren and her great-grandson Calvin John Ayers-Burkgren. Marjorie was preceded in death by husband Calvin, infant son John Calvin, parents Blanche and Zeb, infant brother Richard, and brother John Lizer.
Published by Ames Tribune from Jun. 1 to Jun. 2, 2021.
To plant trees in memory, please visit our Sympathy Store.
MEMORIAL EVENTS
Jun
2
Graveside service
Gowrie Township Cemetery
IA
Funeral services provided by:
Palmer & Sons Funeral Home Inc
MAKE A DONATION
MEMORIES & CONDOLENCES
Sponsored by Palmer & Sons Funeral Home Inc.
1 Entry
We are so saddened to hear about Marjorie's passing away. We enjoyed seeing her at Iowa State football Veterinary Medicine lunches when she was able to attend. Marla kept us posted an how she was doing.
It is not for Marjorie that we grieve but for her family and friends as we will miss her.
James and Pat Wistrom
Friend
June 4, 2021
Showing 1 - 1 of 1 results