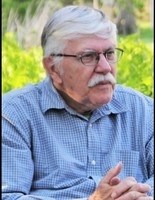 BORN
1932
DIED
2021
FUNERAL HOME
Stevens Memorial Chapel
607 28th Street
Ames, IA
Sterling "Sam" Shreve
Sterling "Sam" Paul Shreve was born in Sioux City, Iowa to Neal C. and Esther (Christiansen) Shreve on February 26, 1932.
He passed away at the Israel Hospice House in Ames, Iowa, on June 9, 2021, with his loving family near his side.
Sam was united in marriage to Ruth Ilene Lauritsen on February 13, 1957. Sam and Ruth had two children, Kelly Brodie and Karen Thiel. Sam had a son, Paul Shreve, from a previous marriage.
In 1956 Sam started working for the Soil Conservation Service in Sioux City where he was a surveyor. He transferred to Ames in 1971 with the NRCS, as a soil map cartographer. He retired from the NRCS in 1987.
Sam enjoyed spending time with his family and playing cards with his many friends. He was known for his quick wit and making people laugh. He was a longtime member of St. Andrews Lutheran Church in Ames.
He is survived by his loving wife, Ruth, and his daughters, Kelly Brodie and Karen (Denny) Thiel; four grandchildren, Michael Ryan Brodie (Katy Beerhohm-Young), Emily (Nic Carnes) Brodie, Amber (Tim) Jacklin, Justin (Ashley) Redding; and ten great-grandchildren.
He is also survived by his sister and brother-in-law, Betty (Gordon) Williams; brother-in-law, Lance Lauritsen; and sister-in-law and brother-in-law, Sue (Gary) Baker; and many dear friends and extended family members.
He was preceded in death by his parents; parents-in-law, Viggo and Florence Lauritsen; siblings and their spouses, Pauline (Dale) Harter, Neal Shreve Jr., Mark (Arlene) Shreve; and son-in-law Mike Brodie.
The family would like to thank Mary Greeley Hospice Services for their care and comfort.
Private graveside services will be held at the Iowa Veteran's Cemetery in Adel, Iowa.
In lieu of flowers, memorials can be directed to the Israel Family Hospice House in Ames.
To plant trees in memory, please visit our Sympathy Store.
Published by Ames Tribune from Jun. 9 to Jun. 13, 2021.
MEMORIAL EVENTS
No memorial events are currently scheduled.
To offer your sympathy during this difficult time, you can now have memorial trees planted in a National Forest in memory of your loved one.
Funeral services provided by:
Stevens Memorial Chapel
MAKE A DONATION
MEMORIES & CONDOLENCES
Sponsored by Stevens Memorial Chapel.
1 Entry
Dear Ruth,

We were very sorry to hear of Sterling's passing. You are in our thoughts and prayers.