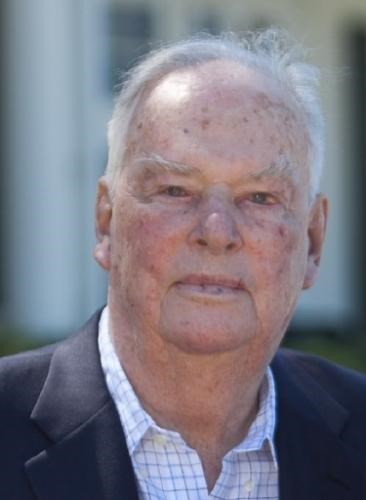 BORN
1926
DIED
2015
FUNERAL HOME
Schiller Funeral Home - Harbor Springs
5505 M-119
Harbor Springs, MI
Farley, James, D. 6/24/1926 - 6/19/2015 Hobe Sound, FL James Duncan Farley died peacefully at home in Hobe Sound, Florida on June 19, 2015 after a progressive decline in health. Mr. Farley was born on June 24, 1926 to Alice Duncan Farley and Donald Stephen Farley in Chicago, Illinois. The eldest of six children, he was raised in Madison, Wisconsin where he graduated from Edgewood High School. In 1944, he entered the Merchant Marine Academy. He graduated from Georgetown University in 1950 with a Bachelor of Science in Foreign Service. At Georgetown, he was a member of the Golf Team igniting a life-long passion for golf. In 1950, Mr. Farley was hired as a trainee at the First National City Bank in Buenos Aires, Argentina. The bulk of his 40 year career at Citibank was spent in New York City where he retired in 1991, as a Vice Chairman. During his career, he was involved with the Mercantile Bank of Canada in Montreal, Canada, the Citibank New York State Branches, the Citibank Merchant Bank, and he was the head of corporate banking in Central and South America. He was the consummate New York City Banker in banking's heyday. In 1960, James Farley married Mary Kay Tracy. The Farley's raised their four children in Greenwich, Connecticut. He served as a Trustee of International House, Manhattan College, Georgetown University, and the Anderson School of Business at UCLA. He was a Knight of Malta, and served as the Chairman of the Board of Directors of the John A. Hartford Foundation. In 1991, Mr. Farley retired from Citibank and maintained residences in Hobe Sound, Florida, Harbor Point, Michigan and Pebble Beach, California. He remained active at the Hartford Foundation, on the Golf course and traveled the world. He was a member of the Cypress Point Club, the Los Angeles Country Club, the Lyford Cay Club, the Everglades Club, the Little Harbor Club, and the Question Club. He was a founding member of the Loblolly Pines Golf Club, and a Director of the Wequetonsing Golf Club and the University Club of New York. He was predeceased by his wife Mary Kay Farley, a year ago, after 54 years of marriage. He is survived by his children Frances A. Farley, M.D. (Darryl J. Snabes), James D. Farley, Jr. (Cornelia Connor Farley), Kathryn T. Farley, PhD, and Andrew E. Farley. He is also survived by six grandchildren, two brothers, two sisters, two brother in laws, five sister in laws and thirty four nieces and nephews. In lieu of flowers, please send donations to the Holy Childhood Church, Harbor Springs, Michigan, Georgetown University, and the Highland Cottage Hospice, Petoskey, Michigan Funeral Mass is at Holy Childhood Catholic Church, 150 Main Street, Harbor Springs, Michigan at 11 AM, June 27, 2015. The family will greet friends at 10 AM at Holy Childhood Church. Burial will follow at the Holy Childhood Cemetery, Harbor Springs, Michigan. Funeral arrangements are through the Schiller Funeral Home. Schiller Funeral Home Harbor Springs, Mi.
Published by Ann Arbor News from Jun. 22 to Jun. 25, 2015.
MEMORIAL EVENTS
Jun
27
Visitation
10:00a.m.
Holy Childhood Catholic Church
150 Main Street, Harbor Springs, MI
Jun
27
Funeral Mass
11:00a.m.
Holy Childhood Catholic Church
150 Main Street, Harbor Springs, MI
Jun
27
Burial
Holy Childhood Cemetery
Harbor Springs, MI
Funeral services provided by:
Schiller Funeral Home - Harbor Springs
MAKE A DONATION
MEMORIES & CONDOLENCES
15 Entries
Dear Frances,

How sweet it is to see this tribute to your father. I wish you pleasant conversations with your family as you reflect upon the times that you shared together with him.

One of the ways to measure the quality of a person's life is to review the glistening gems of memories that are stored in the hearts of those that loved them. It is clear that your heart's treasure chest is filled with diamonds for your father.
Cherie Barnett
June 16, 2020
Dear Farley Family:

I want to send my condolences to you all. I only had the honor to meet your dad once, but I feel that I knew him much better than that would suggest. Through the many stories I have heard, reading his book, and more I can understand the depth of your loss.

I wish you all the best during this difficult time, and may the memories of his life well lived help sustain you in your grief.

Richard Lipton
July 1, 2015
So sorry for your loss. Keeping your family in our thoughts and prayers.
June 28, 2015
I'm deeply sorry for the loss of your loved one. May loving words comfort your family at this time of sorrow. (Isaiah 57:15)
Ann El
June 28, 2015
Dear Farley Families
You have our Love, Prayers , & Sympathy. We have many Fun golfing memories with both of your parents.
Tom & Gayle Kochan Matthew , Thaddeus, & Katie & thier Families.
Tom- Gayle Kochan
June 27, 2015
Heartfelt condolences to the entire Farley clan. May the many beautiful memories of a life well lived sustain you in the months ahead.

David and I send our prayers, warm thoughts, and condolences to all you. May your memories of precious moments, and the support of loving family and friends help you through this difficult time.

Kindest regards,
Cherie Barnett
June 23, 2015
On behalf of the members of the Farley family, I want thank you for taking the time to share your thoughts about the death of my father. He was an active member of the communities of Greenwich, CT, Pebble Beach, CA, Hobe Sound, FLA and Harbor Springs, MI. A proud Hoya, ace golfer, father, husband and lifelong Citibanker, Dad accomplished impressive feats in his 88 years on earth. Now his legacy of hard work, devotion to family, loyalty to friends, spiritual determination and razor sharp wit lives in each of us. Thanks again for your kind words.

-Katie
Dr. Kathryn Farley
June 23, 2015
Dear Fran and family,
My sincere condolences on your loss.
Susan Ray
Susan Ray
June 23, 2015
The Manhattan College alumni community shares the grief, and is now praying for our Trustee and the family at this time. The Alumni Office has been informed. As well as the Jasper Jottings community that I personally can reach. We are all a little poorer now. "No man is an island, entire of itself ... any mans death diminishes me". We are sorry for your loss.
fjohn reinke (mc1968)
June 22, 2015
Please know how sorry I am for your loss. May the beautiful promise found at Is. 25:8 provide a measure of hope and peace at this time.
Sincerely,
Ann
June 22, 2015
I worked at Citi for many years and fondly remember Jim and Mary Kay Farley. They were an important part of the fabric of Citi and made it human and fun place to work.
Pamela Flaherty
June 22, 2015
Showing 1 - 15 of 15 results