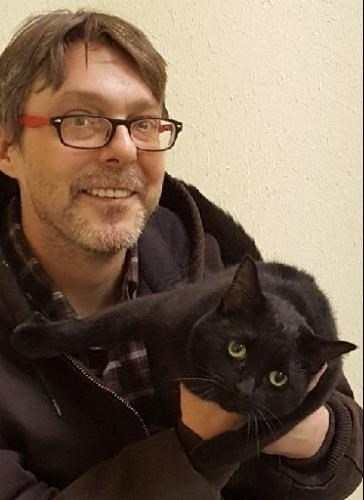 BORN
1970
DIED
2019
ABOUT
Saline High School
FUNERAL HOME
Nie Family Funeral Home & Cremation Service Inc
3767 W Liberty Rd
Ann Arbor, MI
Bingham, Kevin Scott 1/3/1970 - 10/12/2019 On Saturday October 12, 2019, Kevin Scott Bingham lost his valiant 30 year battle with mental illness. While he was cared for by some incredible people, over the last thirty years there was a sharp, continuous downturn in availability and quality of care. He was repeatedly released from hospitals well before he was stable and ready to be on his own. Kevin was born January 3, 1970 in Belleville, Michigan. He was a 1988 graduate of Saline High School and he spent the last decade of his life living in Ann Arbor. He is survived by his paternal grandmother, Marcella Miller; his father, Barry Bingham; his mother, Peggy McDavid; and his two sisters, Kristin (Marty) Dougherty and Aimee (Chris) Bingham Osinski. He is also survived by three nephews, Brandon Pope, Gabriel Branham, and Drake Dougherty; one niece, Lydia Osinski; and a multitude of aunts, uncles, and cousins. He was preceded in death by his maternal grandparents, Olaf and Olga McDavid; and his paternal grandfather, Tipton Bingham. Kevin was more than the illness that robbed him of his life and robbed his family of a brother, son, and uncle. He graduated from Hofstra University with a degree in Political Science. He attended The University of Minnesota's graduate program in Social Anthropology and Wayne State University's MBA program. He was a member of Phi Beta Kappa, a lifelong learner and a lover of books. Kevin was also a world traveler, living in Denmark for a year, traveling to the UK several times and backpacking across Eastern Europe just after the fall of communism. He leaves behind friends all over the world. If anything can be taken from his death it should be that people with mental illness are human, they are loved, and they deserve quality care. They should not be tossed aside and left to suffer. In accordance with his wishes, Kevin will be cremated and the family will hold a gathering Tuesday October 22, 2019, from 10AM – 2PM at Nie Family Funeral Home; 3767 W. Liberty Rd., Ann Arbor, MI 48103. In lieu of flowers, the family requests donations be made in Kevin's honor to the National Alliance on Mental Illness (NAMI Michigan, 401 S. Washington, Suite 104, Lansing, MI 48933).

Published by Ann Arbor News from Oct. 15 to Oct. 20, 2019.
MEMORIAL EVENTS
Oct
22
Memorial Gathering
10:00a.m. - 2:00p.m.
Nie Family Funeral Home & Cremation Service Inc
3767 W Liberty Rd, Ann Arbor, MI
Funeral services provided by:
Nie Family Funeral Home & Cremation Service Inc
MAKE A DONATION
MEMORIES & CONDOLENCES
Sponsored by The Family.
7 Entries
Although I did not personally know Kevin, I was very moved by people who called the NAMI Washtenaw County office to express their grief over the loss of Kevin. After reading his obituary in the Ann Arbor News, I wanted to express my sincere condolences and thank your for your honesty and openness regarding Kevin's mental health condition. It is an amazing act of courage and a gift to others given the stigma still associated with mental illness.
Sincerely,
Barb Higman
Office Manger
NAMI Washtenaw County
Barb Higman
October 24, 2019
Aimee Matte
October 19, 2019
Peggy, I'm so sorry to hear about the loss of your son. Much praise to you and your family for your honesty about Kevin's condition. Treatment for mental health issues is a difficult topic. Prayers for comfort to you and your family. Take care.
Belinda Kingsley
October 18, 2019
I did not know Kevin, but I have known too many young people struggling with a mental illness without much help from medical or governmental communities.

May Kevin now rest in peace for eternity.