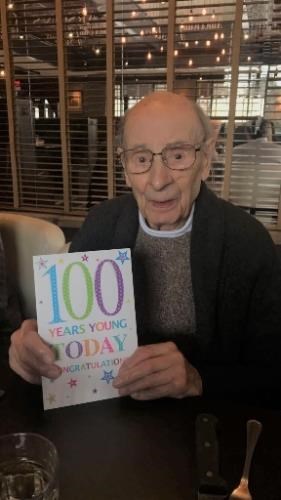 Durrant, William Harold 11/19/1918 - 3/26/2021 Ann Arbor, MI William Harold Durrant, C.Eng, MRAeS Bill Durrant died peacefully at his home in Atria Park, Ann Arbor on Friday, March 26, 2021, at the age of 102. He was born in the London Borough of Islington on November 19, 1918 to Harold Thomas Durrant and Ada Ethel (Summers) Durrant. He was the oldest of three children. His two younger sisters, Eileen and Sheelagh, preceded him in death. Having been fascinated by aircraft since he was a small boy it is probably not surprising that after graduation from Harrow County School for boys he was accepted, at the age of 18, as an apprentice at the De Havilland Aircraft Company. There he began his lifelong career in aeronautical engineering while working on the development of the Mosquito night fighter. After two years as an apprentice he was invited to attend the De Havilland Aeronautical Technical School, one of only two such schools in the world. He also began studying for accreditation by the prestigious Royal Aeronautical Society, achieving Associate Fellow status and, ultimately, full Membership. Bill applied to join the RAF at the beginning of WWII but was turned down because of deafness in one ear. In addition, his job at De Havilland's was a 'reserved occupation' and as such, considered vital to the war effort by Churchill's government. At De Havilland's he also met his soon-to-be wife of 60 years, Jytte (Ulrich) Durrant. In order to court her, he would often set out on foot for the factory in the early hours of the morning, to preserve his petrol ration for more important activities. Post WWII, he worked with the RAF developing gyroscopic guidance systems for long range rockets which were intended to maintain an independent British nuclear deterrent. While this objective was not achieved, the Blue Streak missile, on which he worked, was subsequently used as the first stage of a European satellite launcher. During this time Bill became very interested in emerging aerospace technology and after moving from De Havilland Aircraft to the British Aircraft Corporation he was involved in work on the UK3/Ariel3 satellite, the first entirely British-built satellite to be put into orbit. Uncertain funding for the British aerospace program caused him to look further afield and in 1966 he moved to Ann Arbor, Michigan with his family, to join Bendix Aerospace Systems Division. There he worked on Seeback Effect power cells for NASA's lunar rover, part of the Apollo 11 project, the first manned lunar landing which took place in1969. After the closure of Bendix Aerospace he found his way to the laboratory of Dr. David Felbeck at the University of Michigan College of Engineering. There he spent the rest of his career helping to elucidate mechanisms and analysis of strain aging and brittle fracture in steel alloys, and the long term effects of extraterrestrial exposure on carbon composite materials. From time to time, he was known to take his grandchildren to the lab to learn about the theory and wonder of electron microscopy. In later life he applied his restless imagination and keen observational skills to creative writing. He participated in a local writing group and produced several books, including spy thrillers, memoirs and historical fiction. Throughout this time he maintained his proud independence, only moving to assisted living at the age of 98 following a fall at his home. He is preceded in death by his beloved Jytte (2006) and survived by his adult children, Susan Julius (Stevo) and Timothy Durrant (Sudei Taormina), as well as six grandchildren: Nicholas Julius, Natasha Julius, Ariel Durrant, Arjuna Durrant, Skye Durrant and Loch Durrant, and six great-grandchildren: Keegan Julius, Ford Julius, Theo Julius, Tihana Peterson, Djuka Peterson and Savi Valdez. The family wishes to thank the caring staff at Atria Park for their attentive and kind support. In accordance with the wishes of both Bill and Jytte, their ashes will be returned to their homelands of England and Denmark. In lieu of flowers, donations may be made to the Huron Valley Humane Society.
To plant trees in memory, please visit our Sympathy Store.
Published by Ann Arbor News from Jun. 8 to Jun. 10, 2021.
MEMORIAL EVENTS
No memorial events are currently scheduled.
To offer your sympathy during this difficult time, you can now have memorial trees planted in a National Forest in memory of your loved one.
MEMORIES & CONDOLENCES
Sponsored by The Family.
1 Entry
Good bye, Bill.
You helped me in setting up a lab in Mechanical Engineering and we became good friends. I enjoyed your quick wit and your British dry humor.
Maria Comninou
Friend
June 9, 2021