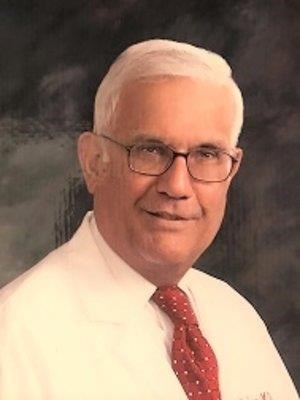 West Long Branch - Angelo James Lopano, MD, 80, passed away peacefully at home in West Long Branch on Monday, May 18th, 2020, after a courageous battle with cancer. Angelo was born and raised in New York. He graduated from Regis High School in New York City, and obtained his undergraduate degree from Fordham University. In 1965, Angelo earned his medical degree from Columbia University College of Physicians and Surgeons, completed his general surgery training at University of Pennsylvania. After spending two years in the Air Force as a general surgeon, stationed at Hamilton Air Force, CA, he completed his orthopedic residency at Harvard University before joining Monmouth Medical Center. He served as chairman and program director of the orthopedic department from 1988-2008. He was a fellow of the American College of Surgeons, American Academy of Orthopedic Surgeons, and American Academy for Cerebral Palsy and Developmental Medicine, Angelo received the Pinnacle Award in 2003 from Monmouth Medical Center. This dedicated and compassionate physician will be missed by all. He was an avid gardener in the spring and prided himself with growing his own vegetables and making his famous spaghetti sauce. He called himself, a "minor gardener, a minor cook, and a major history buff". He loved taking daily walks on the Long Branch Boardwalk and attending operas at Monmouth University.

Angelo is predeceased by his father, Frank Lopano, and his mother, Jennie Lopano; his sisters, Angela Cordaro and Rose McFadden. He is survived by his loving wife of 50 years, Amelia; his beloved daughter and son-in-law, Jennifer and John Webster; his beloved son, Frank Lopano; and his three cherished grandchildren Sophia, Timothy, and Daniel; his sister Isabel Rebori and her husband, Robert Rebori; his brother, John Lopano, and several nieces, nephews, and cousins.

He was a member of St. Jerome's Church of Our Lady of Hope Parish, and an avid supporter of their school. Due to the pandemic, private services will be held for the immediate family. A memorial service will be announced at a later date. In lieu of flowers please consider a donation to St. Jerome's School in West Long Branch. Arrangements are under the direction of Fiore Funeral Home, Oakhurst, NJ and messages of condolences may be sent to the website at www.fiorefuneralhomes.com.

To plant trees in memory, please visit our Sympathy Store.
Published by Asbury Park Press from May 22 to May 24, 2020.
MEMORIAL EVENTS
No memorial events are currently scheduled.
To offer your sympathy during this difficult time, you can now have memorial trees planted in a National Forest in memory of your loved one.
Funeral services provided by:
Fiore Funeral Home Inc - Oakhurst
MAKE A DONATION
MEMORIES & CONDOLENCES
Sponsored by Fiore Funeral Home Inc - Oakhurst.
4 Entries
Angelo was a great friend.I will miss him.
Michael McCormack
Friend
May 27, 2020
I was one of his classmates at Holy Trinity ('53) and Regis. ('57). Always a bright and caring person. We had long conversations at Regis reunions about the good times while growing up. At the last reunion, I shared a taxi with him to go to Penn Station. Ironically, he said that many of us would not be at the next reunion. He will be in my prayers. It is the end of a great longtime friendship, and will be missed!
Raymond Begin
Classmate
May 26, 2020
Angelo was a man of substance. He loved helping people he was the consummate physician. My husband worked with him for decades they always respected each other and never had a fight or disagreement. He will be sorely missed.
Claire
Friend
May 24, 2020
My fondest memory of Dr. Lopano is when my father was operated on my Dad. Two weeks after he passed away I received a bill and I called to tell Dr Lopano that my father passed away and he said to tear the bill up. I could not believe the kindness he bestowed on my family. Those were the days that Drs really care for their patients. That generosity cant and will never happen. God Bless him and may he Rest In Peace and join my Dad in heaven
Rosemarie
May 22, 2020
Showing 1 - 4 of 4 results