AUSTIN FRANCIS
NEWMAN
AGE: 93 TOMS RIVER
Austin Francis Newman, 93, of Toms River, passed away Monday, May 18, 2009. Mr. Newman was born Nov. 21, 1915 in Elizabeth. He lived in Westfield for most of his adult life before moving to Toms River in 2001. He was employed by Elastic Stop Nut, Union and retired in 1982. Mr. Newman was known for his athletic accomplishments. In addition to his national and world records in swimming, he was inducted into the USA Track & Field Masters Hall of Fame in 2007 for his running prowess. His election was based on his three national records, five world records, and 22 national championships as a middle distance runner. He was virtually unbeatable in his age group in numerous triathlons.
Mr. Newman was predecesaed by his wife of 57 years, Marion Otto. He is survived by his daughters, Elsie Romach of South Toms River, Shirley Budd of Loch Haven, Pa., and Diane Manca of Toms River; his son, Kurt Newman of Gorham, Maine; seven grandchildren; and five great-grandchildren. He is also survived by four sisters; a brother; and many nieces and nephews.
Relatives and friends are kindly invited to the visitation from 10 a.m. Thursday, May 21 until the service at noon at the Union Funeral Home-Lytwyn & Lytwyn, 1600 Stuyvesant Ave., Union. The entombment will be private. In lieu of flowers, donations can be made to the First United Methodist Church, 129 Chestnut St., Toms River, NJ 08753.

To plant trees in memory, please visit our Sympathy Store.
Published by Asbury Park Press on May 20, 2009.
MEMORIAL EVENTS
No memorial events are currently scheduled.
To offer your sympathy during this difficult time, you can now have memorial trees planted in a National Forest in memory of your loved one.
MAKE A DONATION
MEMORIES & CONDOLENCES
7 Entries
Austin was an inspiration to me when I swim. He helped show me that anything is possible. I had the pleasure of getting to swim with him at a few masters meets. I will miss seeing him at the next meet.
Thomas Alne
May 23, 2009
Austin's spirit will always be felt here in the pool at the Y. We are so lucky to have been a part of his daily routine and to have known his wonderful family.
Barb Serpi
May 21, 2009
I was amazed when I attended my first Masters Swim meet at Raway, NJ a few years ago and met Austin. He was a real inspiration to me and I'm 73. I hope I will be able to continue swimming until I'm in my 90's. God Bless you, Austin.
Bill Haas
May 20, 2009
We would look out our kitchen window and see Austin working in the yard, we knew it was a good day. He inspired us the way he worked so hard and took pride in his home and family. We will miss him greatly!
Al & Roseann Reed
May 20, 2009
Austin's memory and spirit will always be alive at the 12 lane pool of the YMCA. I will remember and love him always for the exceptional wonderful man he was.
Kathleen Ullery
May 20, 2009
What an example he set for us to follow. He was truly one of those special people we meet in our lives that leaves a lasting impression. Never saw him with out that bright smile on his face- even after a tough race.

I will cherish all the memories.

His family will miss him. May God ease your pain with the lessons Austin taught us all.
Ray Funkhouser
May 20, 2009 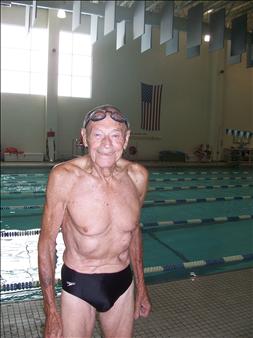 We will miss your enthusiastic presence at the Ocean County YMCA pool and at masters swim meets around the state and country. You were a world record holder in every respect.
Bob Hopkins
May 20, 2009
Showing 1 - 7 of 7 results