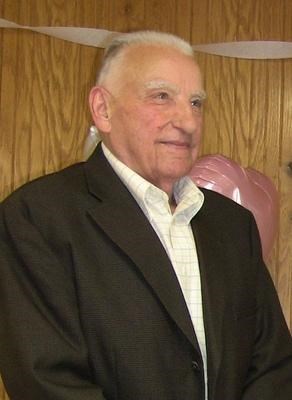 Boleslaw Jurkiewicz, age 91, of the Forked River section of Lacey Township for the past 50 years, passed away peacefully in his home on Sunday, February 16, 2014 at 5:15 pm.

Boleslaw was born in Poland and married in Germany to his beloved wife Benedykta of 67 years. They came to the United States in 1951 from England with two children, $50.00 and a trunk of clothing and became a United States citizen in 1963.

Boleslaw is a WWII Veteran where he served with the Polish Branch of the Royal British Air Force attached to the British Command and was wounded in service. He received unit citations for service in France, Belgium and Holland.

He was employed for over 30 years with the Elizabethtown Gas Company, Woodbridge, NJ, before retiring 25 years ago.

His joy was watching his eleven great grandchildren growing up. Boleslaw was a simple man who took pleasure in simple things. He was very active and especially loved the outdoors. He was an avid reader and loved Polish and American history.

Friends may call from 3-7 pm Thursday at Layton's Home For Funerals, (609) 971-6800, 250 W. Lacey Road, Forked River, Lacey. Relatives and friends of the family are respectfully invited to attend the funeral on Friday at 8:30 am from the funeral home, hence to St. Pius X Roman Catholic Church, Forked River, where a Mass of Christian Burial will be celebrated at 9:30 am. Burial will follow Saint Joseph's Cemetery, Toms River. In lieu of flowers, donations in memory of Boleslaw would be appreciated to Vandyke Hospice, Toms River, NJ.


Published by Asbury Park Press on Feb. 18, 2014.
To plant trees in memory, please visit our Sympathy Store.
MEMORIAL EVENTS
To offer your sympathy during this difficult time, you can now have memorial trees planted in a National Forest in memory of your loved one.
Funeral services provided by:
Layton's Home For Funerals
MAKE A DONATION
MEMORIES & CONDOLENCES
8 Entries
I salute a hero. Condolences and blessings to all who love him
Irene W.
February 21, 2014
Dear Chester,Nancy and family,You are all in our thoughts and prayers during this sad time.Fondly
Bill & Barbara Fiedler
February 19, 2014
I miss you already DAD. You were not a father in law. You were a father to me.
Dennis Haemmerle
February 18, 2014
On behalf of the Reiff Family - your neighbors - I'd like to say how sorry I am to hear that both your mother and now your father has passed away. He was a very nice man who cared about his family, country and neighbors. He always took time to say hello and ask about folks.