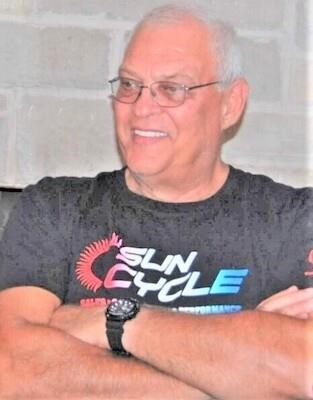 Wall - Frank J. Day, 74, of Wall, passed away at home on Wednesday, March 24, 2021, surrounded by his loving family. Frank was predeceased by his wife, Linda (2004), and is survived by sons Thomas and Brian; brothers Jim and Rick (Annette); niece Mary Jo; nephew Rob (Anne) and their children Ryan and Angela; niece Stine (Eddie) and their son E.J.; and beloved partner Sharon, and her daughters Allison, and Erica (Marcel). Frank was born on October 28, 1946, in Passaic NJ to Josephine Day (nee Hudak) and Richard Gerard Day. He grew up in Parlin, graduating from St. Mary's High School, South Amboy in 1964. He graduated Monmouth College in 1969, where he majored in Accounting. Frank immediately began employment with Hess Oil, Woodbridge, but was drafted into the Army three months later. After attending Basic Training/AIT, Frank served in the 101st Airborne, Hue, South Vietnam. In 1971, after completing his service, Frank worked at P&L Trucking, Madison Township. In 1973, Frank began his 30 year civilian career with the US Army at Ft. Monmouth. There he met lifelong colleagues and friends through work and softball activities, and his wife Linda Beth Gowdy, (married 1975). They later enjoyed three years traveling in Europe, while assigned together at DODSEUR, Karlsruhe, FRG. After returning home in 1980, Frank and Linda began their family, with sons Thomas born in 1981, and Brian in 1984. He enjoyed the boys BMX activities, and this hobby resulted in his later positions of Official Referee, National Bicycle League; and Secretary and Commissioner, NJ BMX Association. Frank and Linda shared a love of animals, through their pet sitting business "Pet Days" which son Brian helped manage following her death. Frank continued working in various positions within the Comptroller/Resource Management arena. He served as the CECOM Budget Officer, during Operations Desert Shield and Desert Storm, and in the aftermath of the 9/11 attacks. Frank was proud of his organization and employees, who worked hard to support the warfighters. Frank retired from federal service in 2002, but worked on several defense contractor projects over the years. He retired again with Sharon, to enjoy many years of Count Basie concerts and riding his Harley and BMW motorcycles, locally, and in Florida. Their July 4th motorcycle "iron butt" rides in the Poconos with Rosemary and Bob, and his decade of winters with Sharon on their deck at Capt'n Butchers on the Indian River in Sebastian Florida, was his retirement passion. Visits with Marcia and Kevin and old Jersey friends; and rocket launch parties and dinners with veranda neighbors were special to him. Frank was fun with a boisterous spirit and a heart of gold. He will be missed. Visitation will be at the Reilly Bonner Funeral Home, 801 D Street, Belmar, NJ on Tuesday, March 30, from 10:00am - 1:30pm, with the service in the funeral home at 1:30pm, followed by entombment at Monmouth Memorial Park, Tinton Falls. In lieu of flowers, please donate to a charity of your choice. For further information or to send condolences to the family please visit reillybonnerfuneralhome.com.


Published by Asbury Park Press from Mar. 26 to Mar. 28, 2021.
To plant trees in memory, please visit the Sympathy Store.
MEMORIAL EVENTS
Mar
30
Visitation
10:00a.m. - 1:30p.m.
Reilly Bonner Funeral Home
801 D Street, Belmar, NJ
Mar
30
Funeral service
1:30p.m.
Reilly Bonner Funeral Home
801 D Street, Belmar, NJ
Mar
30
Committal
2:30p.m.
Monmouth Memorial Park
4201 State Highway 33, Tinton, NJ
Funeral services provided by:
Reilly Bonner Funeral Home - Belmar
MAKE A DONATION
Please consider a donation as requested by the family.
MEMORIES & CONDOLENCES
Sponsored by Reilly Bonner Funeral Home - Belmar.
4 Entries
My sincere condolences. Frank was truly one of a kind. Just a brilliant man who was always willing to share his knowledge.
May god bless you always.
James Nowicki
Coworker
March 30, 2021
Frank I was very upset when Jim told me you passed.it seems like yesterday we hung around laurel park,Pete's deli and Carlos pizza.I remember the school days we all had together and specially the good all baseball days we all played.god bless you my friend and we will all play baseball again someday. Rick/Ellen schreck
Richard Schreck
Friend
March 28, 2021
Condolences to Frank’s family. I was an old friend of Frank’s back on the 70’s-80’s.
He was a trustworthy friend and a Great Teammate . RIP Big Frank.
Pat Dineen
Friend
March 27, 2021
RIP Frank such a gentleman and great man
Johnell Hubbard
Acquaintance
March 27, 2021
Showing 1 - 4 of 4 results