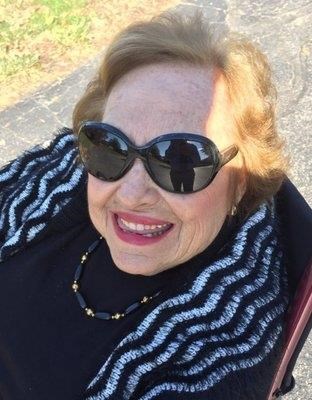 87 years, passed away on April 10, 2020. Beloved wife of the late Allan D. Mayro, whose family owned the first open air parking lots in Philadelphia and Atlantic City. Beloved daughter of Edna (nee Levy) and Philadelphia real estate icon Jacob H. Axilbund (founder of Lanard & Axilbund, now Colliers International Philadelphia. The original firm was founded 100 years ago). Cherished mother of Eric (Debra), Kurt, Esq. (Tina, Esq.), Pamela, Esq. (The Honorable Denis P. Cohen), Karl (Jeffrey) and devoted grandmother of Alexandra (Matthew Stevens), the late Elissa Natalie, Stephanie, Benjamin, Joshua and Rachel. Beloved great grandmother of Matthew, Adriana and Jackson. Pat was a graduate of West Philadelphia High School and attended the University of Pennsylvania. She was a long time resident of Drexel Park, Pa and Harvey Cedars, NJ. Additionally, Pat was a direct descendant of Nathan Levy, whose ship brought the Liberty Bell from England to America and of Aaron Levy, a major financier of the Continental Congress and the founder of Aaronsburg, Pa. in 1786. She was crowned runner-up in the Miss Atlantic City Beach Patrol for 1950 and 1951. She represented the Beach Patrol in the Miss America Parade. Pat then went on to have an extensive modeling career in Atlantic City and Philadelphia. Pat was a member of the Jewish Community Center of Long Beach Island and a former member of Temple Shalom in Broomall,Pa. Pat had been an active board member of the Bellarmine Guild at St. Joseph's University and served on the Mother's Association for Episcopal Academy, while her son Karl was a student there. Pat was a tireless sports fan, especially football. She was known for her wit, sense of humor, intellect and her many parties. She was the family matriarch and will be deeply missed by all. Donations in her memory may be made to the Providence Animal Shelter, 555 Sandy Bank Road, Media, Pa. 19063 or to Francisvale Home for Smaller Animals, 328 Upper Gulph Road Radnor, Pa. 19087. www.goldsteinsfuneral.com


Published by Beach Haven Times from Apr. 11 to Apr. 16, 2020.
To plant trees in memory, please visit the Sympathy Store.
MEMORIAL EVENTS
To offer your sympathy during this difficult time, you can now have memorial trees planted in a National Forest in memory of your loved one.
Funeral services provided by:
Goldsteins' Rosenberg's Raphael-Sacks
MAKE A DONATION
MEMORIES & CONDOLENCES
Sponsored by Goldsteins' Rosenberg's Raphael-Sacks.
11 Entries
Dear Eric,We remember ur Mother as a very happy,loving &caring lady.My husband tutored u for ur college boards when u were at Malvern Prep.That is how we met her.
Our condolences to all ur family.
Sincerely,
Mary & Nick Robak
April 24, 2020
Sending my heartfelt condolences to Pam and the entire Mayro family. I know your mother meant the world to you and I hope your happy memories bring you comfort. You are in my thoughts and prayers.
Kathy Duffy
April 17, 2020
I have never met such a strong woman like I did In Patricia. Who I referred to as Mother Mayro. Her warm presence and contagious laugh lit up a room and always made me feel welcomed. I loved how much she admired Karl and his friends such as myself. I consider myself very lucky to have known her and just as lucky to have Her son as my friend whom she raised with pride. Rest In Peace , Mother Mayro. You were truly a remarkable person and I will miss you greatly but your legacy lives on in Karl.
Rob Howard
April 15, 2020
My sincerest sympathies go out to Pam, Denis, Allie, Karl, and the rest of the Mayro family.

I will never forget Pat's gorgeous, smiling face in the car line at Episcopal Academy in Merion. There was a lightness and joie de vivre about her that was irrepressible. She always made you laugh.

Am thinking of you during this sad and difficult time.
Jill Fulton
April 14, 2020
Love, Pamela
Pamela
April 14, 2020
A lot of people in this world were beyond lucky to know my grandma, but its an absolute honor that I got almost 29 years and my son got 7 years having one of the best grandmoms/great grandmoms in the world.
Stephanie Mayro
Grandchild
April 14, 2020
Eric, Karl and Pam truly loved there Mother, and will miss her so. I know that she helped make Eric the man he is.

Rest in Peace
Debbie Belt
April 14, 2020
eric mayro
April 14, 2020
Karl Mayro
April 13, 2020
Patsy Mayro was a great friend and neighbor. She was smart, funny and beautiful. She had a true zest for life and did not hesitate to experience it to the fullest. We all valued her sage advice and her warm, friendly ways. Patsy is irreplaceable and we will all miss her.
Pauline
April 12, 2020
Pauline
April 12, 2020
Showing 1 - 11 of 11 results