RAYMOND BREE VALERIO
AGE: 57 RED BANK
Raymond Bree Valerio, 57, of Red Bank, passed away suddenly on October 6, 2010 at Cornell Hospital in NY. He was born in Neptune on September 17, 1953 and was raised in Wanamassa and Sea Bright. He graduated from Shore Regional High School as well as Syracuse University and later went on to receive an MBA from Monmouth University. While Raymond was working for Time Warner, he began to dapple in antiques. His first venue was a space in the Red Bank Antique Center. He resigned from Time Warner to open his first shop in Fair Haven, it was there that "The Lamp Lighter" became a big part of the business. In April of 1994 he purchased the building at 147 Broad St. Being a long dime "doer," he turned it into it's present state. With his talent for interior decorating and design, his business flourished.
Raymond is survived by his parents Victor and Anne (Bree) Valerio, his brothers Donald, James and his wife Marianne, Vincent and his wife Susan, and Daniel and his wife Carolyn; 13 nephews and 6 nieces and his long time friend Craig Cardy. Raymond also leaves behind his faithful staff, Nancy Orsini, Lynn Hickson, Maria Johnson, Helen Ellison, Marge Bertrand, Victoria Bruno, William Orellana, Roberto, and many cherished friends.
Visitation will take place on Friday October 8, 2010 from 4pm to 8pm at the John E. Day Funeral Home 85 Riverside Ave. Red Bank, NJ 07701. A Funeral Liturgy will take place on Saturday at 11am at St. James RC Church in Red Bank. Interment will follow at Mt. Olivet Cemetery in Middletown. In lieu of flowers memorial donations may be made in Raymond's name to The Ronald McDonald House 131 Bath Ave. Long Branch NJ 07740. Please visit Raymond's memorial website at www.johneday.com

To plant trees in memory, please visit our Sympathy Store.
Published by Asbury Park Press on Oct. 8, 2010.
MEMORIAL EVENTS
No memorial events are currently scheduled.
To offer your sympathy during this difficult time, you can now have memorial trees planted in a National Forest in memory of your loved one.
MAKE A DONATION
MEMORIES & CONDOLENCES
Sponsored by The Tower Hill and Lamplighter Staff.
18 Entries
Remembering a wonderful man...
Ted Latimer
September 27, 2015
Why does it seem to be that the kindest and most gentle souls leave us too soon?
I did not know of his Birthdate but was thinking of him in recent days from far off Colorado...
Ted Latimer
September 18, 2014
Thinking of you with love on your Birthday Then again, I think of you everyday.
Time with you was always an adventure.
I miss you so much!
September 17, 2014
Who can say for certain,
maybe your still here,
I feel you all around me,
your memory so clear.
Nancy Orsini
November 5, 2011 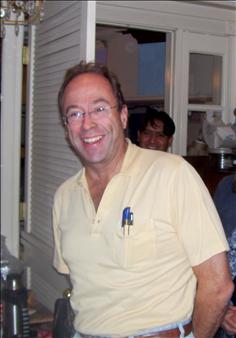 Nancy Orsini
November 5, 2011
My sincere condolences on the unexpected passing of Ray. We had only just met when I brought a client in to shop for antiques last Summer. I felt that I had found a new friend in this kind and talented individual...
Ted Latimer
March 30, 2011
I knew Ray at Syracuse University. We are students in the Business School together for four years. In recent years, we worked-out together at the Atlantic Club. I enjoyed the way he always like to tweek everyone's nose in jest. Ray was a good student both in school and life.
Jim Palumbo
March 9, 2011
Raymond was a incredibly talented artist, a true design professional, a caring individual of the highest integrity, and above all a steadfast and precious friend.

Ray helped me establish and refine my tastes in antiques and elements of design. Every room in my home (even my attic!) contains treasures that I bought from Raymond, in many cases, things that he found and bought with me in mind because he knew my tastes and what I valued.

I haven’t lived in Monmouth County since 1992 but have long-hoped to return to Red Bank, to see the shop, and introduce Ray to my wife, who I married in 1997 and who loves the treasures in our home as much as I.

I was blessed to know Raymond, and I am so incredibly saddened today to learn of his passing.
Mike Twaddell
October 14, 2010
Raymond and Family, Each morning we awaken to the lovely rooms you created for us with your artistic talent. But even more we are reminded of your caring ways and concern for us. The "Hi ,are you all right..." phone calls, as discribed by your brother's eulogy, were a constant reminder of your friendship. We will miss your quirky laugh, Rosebud's barking phone tone, and that great smile. We wish your family our sincerest symphathy and especially your Mother who we got to know from buying a chair right out from under her at the shop, and visiting with her there often. The loyalty you inspired in your staff was evident, because you really cared about them and they you. We have all been blessed with having you in our lives. We love you. Marilyn and Gordon Boak
marilyn boak
October 14, 2010
Anyone who knew him, knew that Raymond was one-of-a-kind. He had a kind spirit and a talented eye. His presence in this community will be sorely missed. My condolences to his family and his devoted staff.
Barbara Campbell
October 11, 2010
We were really shocked to hear of your death. and my family and I will really miss you. I heard about it when it was too late to attend the services, but I can deeply sympathize with your family. You have been so kind to us, and we will miss your guidance and uplifting personality.
lynn azzolina and family
October 10, 2010
Ray Mornings will never be the same at the Atlantic Club without your smile, high energy workouts and always knowing you would ask us...
"Is everything OK?"
Ron Scott
October 8, 2010
I loved my friend
He went away from me
There's nothing more to say
The poem ends,
Soft as it began-
I loved my friend."