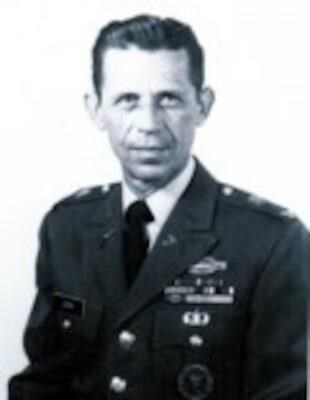 Ted was born in Plattsburgh, New York. He attended Brooklyn Tech High School, graduated from the United States Military Academy in 1946 and later received a MS degree in Engineering from the University of Arizona. During his long, distinguished career in the U.S. Army he served in Korea, Japan, Germany and in the Dominican Republic, as well as numerous assignments throughout the United States. He was awarded the Legion of Merit. He became one of the Army's earliest experts in the field of computer science. Ted rose through the ranks to become a full colonel, finally retiring in 1975.

A voracious reader, he also enjoyed classical music, hiking, tennis and swimming. In retirement, he had the time to fully engage in his many interests, becoming an accomplished photographer and fine woodworker. He also continued to pursue his interest in computers. Two of his favorite past times were watching his beloved New York Yankees and old Western movies.

Ted was a brilliant man with an inquisitive mind and a sharp wit, who enjoyed telling a good story. He was dearly loved by his family and will be greatly missed.

Visitation will take place from 4 to 8 p.m., on July 7, 2021 at D'Elia Funeral Home, 1300 Vermont Ave, Lakewood, NJ. A Funeral Mass will be celebrated at 10:30 a.m. on July 8, 2021 at St. Luke's Roman Catholic Church, 1674 Old Freehold Road, Toms River, N.J. Interment will follow at the General Doyle Veterans Memorial Cemetery, 350 Province Line Road, Wrightstown, NJ. In lieu of flowers, memorial contributions may be made to a favorite charity of the donor's choice.


Published by Asbury Park Press from Jun. 24 to Jun. 27, 2021.
To plant trees in memory, please visit the Sympathy Store.
MEMORIAL EVENTS
Jul
7
Visitation
4:00p.m. - 8:00p.m.
D'Elia Funeral Home
Route 70 & Vermont Avenue, Lakewood, NJ
Jul
8
Funeral Mass
10:30a.m.
St. Luke's Roman Catholic Church
1674 Old Freehold Road, Toms River, NJ
Funeral services provided by:
D'Elia Funeral Home
MAKE A DONATION
Please consider a donation as requested by the family.
MEMORIES & CONDOLENCES
Sponsored by D'Elia Funeral Home.
1 Entry
Our hearts are broken of hearing the news of your fathers passing. Remembering his funny stories he would share, that was sure to bring a laugh and a smile, of a man who truly enjoyed life to the fullest and being around his family. He was always there for all of his children, and still as they became adults with their own. Remembering him and his lovely wife, Philomena visiting his daughter Patti and my dear brother, Tommy who since has passed, during one of their visits. They would travel to each of his kids town and spend time with their family, then to the next town for another visit. I thought that was so special to spend individual and quality time with each family. My heartfelt condolences and sympathies go out to the family on the loss of a very important person in your life, your husband,, your friend,, and the adult children, a man who is simply known as "Dad". May God comfort you all in this difficult time and in the days ahead. We love you all, our prayers are with you today and always. "The Pruitt's" Debbie, Anne, Dicky, Donna
Debra Pruitt-Accardi
Family
July 7, 2021
Showing 1 - 1 of 1 results