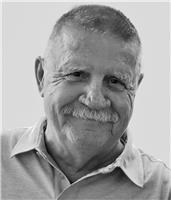 Francis L. Adams passed away on September 6, 2021, at the age of 77, surrounded by the love of his family. Francis was born in Los Angeles, California, to Jesse and Orpha Adams.

Francis was a proud marine, police officer, attorney, father and grandfather. In his youth, he worked at his dad's Flying "A" service station in Inglewood, in the Motion Picture industry and was a Hermosa Beach Police Officer. Francis joined the Yuba City Police Department in 1967, and worked his way to the rank of lieutenant.

He left law enforcement to attend McGeorge School of Law where he earned his Juris Doctor degree. Francis opened his law office in 1982. He loved the practice of law, serving his clients and serving the community. Francis always said he moved to Yuba City because he had a good hunting dog and a new shotgun. He stayed because he loved the community. It was a wonderful place to raise his family and practice law.

Francis was always active in the lives of his two sons growing up. He was their baseball and soccer coach, taught them to hunt and fish, and always played an important role in their lives. He loved family trips of houseboating on Lake Oroville, fishing at Lake Almanor and snow skiing at Lake Tahoe. He traveled to Panama, Costa Rica, Mexico, Canada and Alaska for fishing trips.

He was a two-time president for the Early Riser Kiwanis. Over the years, he enjoyed participating and supporting many community activities such as the Bok Kai Parade, Ducks Unlimited Greenwing Program, Youth Livestock Projects, Chili Cook-offs and various charity golf tournaments. He was a long time member and past president at Peach Tree Golf and Country Club. It was his favorite place to be on Saturday and Sunday mornings.

Francis took great pride in his family, work and helping others. He will be remembered for his character, humor, love for people and compassion. He was a loyal and loving husband, awesome father and grandfather. He will be deeply missed and forever in our hearts.

A private family memorial is being planned.

Donations in honor of Francis may be made to American Cancer Society or a charity of your choice.
Published by Appeal Democrat from Sep. 25 to Sep. 29, 2021.
To plant trees in memory, please visit the Sympathy Store.
MEMORIAL EVENTS
To offer your sympathy during this difficult time, you can now have memorial trees planted in a National Forest in memory of your loved one.
MAKE A DONATION
Please consider a donation as requested by the family.
MEMORIES & CONDOLENCES
5 Entries
Your dad was a very honest gentleman I met him just a few years back regarding some dealings with my ex-husband of which your dad was very honest and sent me to an attorney out of town so that I would be represented well truly touched my heart with his integrity and the love of his family I am so sorry for your loss
Melinda Odom
Work
September 30, 2021
Never did I have a better boss I enjoyed working for him and he will remain in my heart forever.
Gabrielle Brothers
September 27, 2021
What a Great Man and what a loss. Thank you for everything you did for me and my kids. You will never be forgotten .
Karl W. Manies
September 27, 2021
Mr. Adams was a worthy and challenging opponent. His presence in court will be profoundly missed.
Yana Berrier
September 25, 2021
A great guy whose memory will be eternal.
Chuck Poulos
Friend
September 25, 2021
Showing 1 - 5 of 5 results