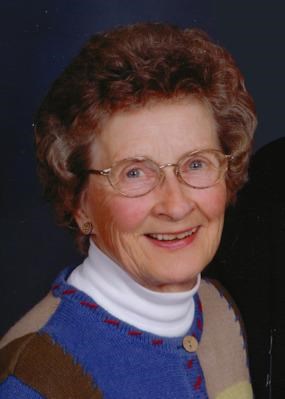 Sioux Falls - Delores Elaine Johnson Moe, age 87, of Sioux Fall, passed away on Thursday, October 8, 2020, at Ava's House in Sioux Falls. Funeral services will begin at 10:30 AM Tuesday, October 13, 2020, at Baltic Lutheran Church. Visitation will be from 5-7:00 PM Monday, at the Minnehaha Funeral Home, Baltic. The funeral will be livestreamed at the Minnehaha Funeral Home & Cremation Services Facebook page. Masks are required at the visitation and funeral.

Delores (also known as Lars) was born in Baltic South Dakota on November 19, 1932 to Joe and Inga Johnson. She was the 4th of eight children. She was a very happy active girl growing up and was a bit of a tomboy. She enjoyed playing and rough housing with her brothers, but she was tough enough to hold her own. She gained her nickname when her younger brother couldn't pronounce Delores and so she became Lars 'cause that's how it came out of Orill's mouth.

Delores attended school in Baltic from 1st to 12th grade, graduating from Baltic High School in 1951. She participated in every activity available to the girls at the time (track and basketball). She was a cheerleader for the football, basketball and track team and was also the Baltic homecoming queen.

She married John Moe on November 1, 1952 in Baltic and they had 2 sons - Steve and Randy. They lived in several places including Marion, Canton, Badger, Baltic, Mitchell and finally Sioux Falls. While the boys were still in school, she spent a lot of time driving to and from various practices and sporting events. She also spent time selling Avon products and you could often see her riding down the street in Mitchell on her bicycle delivering her customer orders. Once the boys were gone Delores started working for AAA Travel in Mitchell, working part time. She continued work for AAA after moving to Sioux Falls and was a valuable employee. In fact, she was the only part time employee to receive benefits usually available only to full time employees.

She enjoyed church activities and enjoyed reading her daily devotions. John and Delores also enjoyed traveling, including trips to the Bahama's, Hawaii, Mexico and Norway during their married life, along with many family trips to see the sights in the Black Hills, Duluth, Texas, Arizona, New York and many other places. She liked many craft activities, including helping to make quilts with the church quilters, doing ceramics, crocheting, and stamping handmade greeting cards.