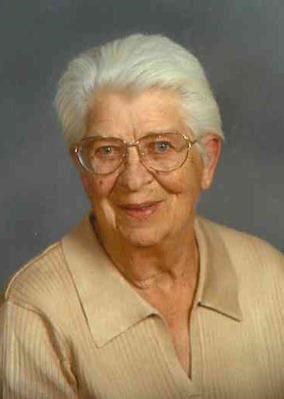 Brookings - Dorothy Adams, 98, of Brookings, passed away on Tuesday, January 5, 2021. Visitation without family present will be on Thursday, January 7, 2021, from noon until 5 P.M. at Eidsness Funeral Home in Brookings. Burial will be private at Hills of Rest Memorial Park in Sioux Falls.

Dorothy Mae Adams was born on April 25, 1922, to Frank and Bertha (Wilka) Wiegman at Larchwood, Iowa. She graduated from Washington High School in Sioux Falls, and was given the opportunity to play her clarinet at the New York World's Fair.

Dorothy met her future husband, Robert "Bob" Adams in 1937, at the age of 15, when the two lived in the same neighborhood across the street from the Coliseum in Sioux Falls. After graduation, Dorothy worked at the Manchester Biscuit Company in Sioux Falls. Bob and Dorothy were united in marriage on December 14, 1941.

Dorothy loved spending time at the cabin at Lake Madison, spending many summers there and holding family gatherings.

She was preceded in death by her husband and parents. Memorials may be directed to the Brookings Humane Society.