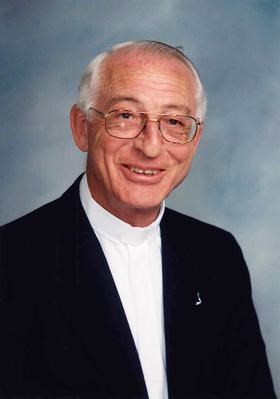 Reverend Leonard P. Kayser, age 82, died peacefully on February 24, 2015 at Dougherty House of the campus of Avera Prince of Peace while in the presence of family members. Always active in his ministry, his death was preceded by a brief episode of infirm health.

Leonard Kayser was born on February 9, 1933 on the family farm near Emery, SD. The 8th of 10 children, he is the son of Felix and Sophia (nee Krier) Kayser. He attended St. Martin School in Emery and the Alexandria Public School for two years of high school before enrolling at Crosier Seminary in Onamia, MN. Leonard continued his priestly formation at St. Paul Seminary in Saint Paul, MN prior to being ordained to the priesthood by the Most Reverend Lambert A. Hoch on May 24, 1959 at the Cathedral of St. Joseph in Sioux Falls.

Upon ordination Father Kayser served as an associate pastor at the parishes of St. Mary in Sioux Falls, Sacred Heart in Yankton, and Sacred Heart in Parkston. During his years of active ministry, he was appointed to the pastorates of St. Michael, in Herried, St. Pius X in Onida, St. Thomas Aquinas in De Smet, and St. Williams in Aurora before appointment to serve as the Interim Executive Director of the National Catholic Rural Life Conference in Des Moines, IA. He returned to the Diocese to serve in the pastorates of St. Francis de Sales in Estelline, St. John in Castlewood, St. Thomas More in Brookings, St. Theresa in Sioux Falls, St. George in Hartford, St. Agnes in Sigel and St. Columba in Mayfield. For a time he also served in a full-time capacity as the Rural Life Director for the Diocese of Sioux Falls as well as in chaplaincy assignments at McKennan Hospital in Sioux Falls and the South Dakota Human Services Center in Yankton. In retirement, Father Kayser provided weekend substitute ministry across the diocese while assisting regularly at Avera Sacred Heart Hospital and its affiliated nursing homes in the Yankton area. He was grateful to call Yankton his adopted home and for the support he received from the brother priests, the Benedictine Sisters and others who shared it with him.

An advocate for the agrarian life and a promoter of the lessons that working the land offer us. Father Kayser freely and actively shared how his upbringing on the farm formed in him the disciplines of a simplified life and a recognition of God's instrumental presence in the bounty we receive. Through his tenacity as well as the context of faith through which he taught of the importance of this noble trade, Father Kayser was well-known in the farming community as a champion for the rural life.

Father Kayser was preceded in death by his parents; two brothers; and two sisters.

Published by Argus Leader on Feb. 26, 2015.
To plant trees in memory, please visit the Sympathy Store.
MEMORIAL EVENTS
To offer your sympathy during this difficult time, you can now have memorial trees planted in a National Forest in memory of your loved one.
MAKE A DONATION
MEMORIES & CONDOLENCES
8 Entries
Father Kayser was very special to our family. We enjoyed many evening meals on CCD nights with him. He will be missed!!
Judy/Ken Schmit
March 2, 2015
You always knew how to bring love, encouragement, and peace to those in need. Forever missed. Never forgotten.
Klarissa Miller
February 27, 2015
Take comfort in knowing that now you have a special guardian angel to watch over you.
Klarissa Miller
February 27, 2015
Father Kayser led our little 1883 Holy Spirit Catholic parish, Blunt, SD during my high school years, and beyond. Over the past 45 years I have thought of him as definitely an icon of faith, family, community and state leadership--a person of personality and a heart for human strife--I am so grateful for his life work. My prayers for our loss, God has a huge plan in eternity.
Sharon Metzinger
February 27, 2015
We were sorry to hear of Father Kayser's passing. He was such a good man and so committed to the agricultural community. He will be missed.
Darlene and Buzz Kutzler
February 27, 2015
He lived a wonderful life and enjoys one even more wonderful. Sympathy for those that loved him.
Mary Ihli
February 26, 2015
We are sorry for your loss, we are in Texas so unable to attend his funeral. We are at Brookings most of the time and was there when Fr Leonard was at St Thomas More. Micks mother was a Marso and his folks were John P and Theresa Warborg who lived next door when Leonard was born.
Ambrose(MIck) Brenda Warborg
February 26, 2015
My prayerful support to the family of Fr. Kayser. May God receive him gently into eternity. It is a great loss for us since he had a heart for social justice and the rights of the poor.
Sister Elaine Garry PBVM
February 26, 2015
Showing 1 - 8 of 8 results