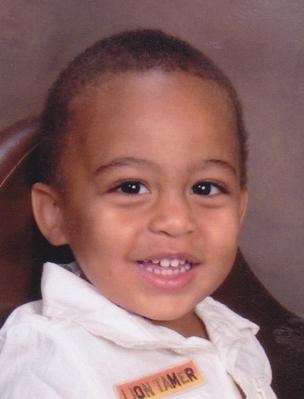 Ty, 2, of Sioux Falls, SD passed away surrounded by family members and close friends on Friday, October 11, 2013, at Sanford Children's Hospital, Sioux Falls, SD. Funeral services were conducted by Miller Funeral Home of Sioux Falls, with Jeff Gould being the officiate. Interment followed at Woodlawn Cemetery, Sioux Falls. A Celebration of Life was held immediately after, at the El Riad Temple.

Ty was born in Minneapolis, MN, on August 22, 2011. His mother is Ashley Ann Doohen of Sioux Falls, his father is Adrian Peterson, of Houston, TX. Shortly after his birth Ty and his mother moved to Sioux Falls, in order to be close to immediate family. Ty was an energetic, fun loving and affectionate little boy. He loved the water in all forms, balls of all shapes and sizes, as well as foods of all flavors.

To plant trees in memory, please visit our Sympathy Store.
Published by Argus Leader on Oct. 20, 2013.
MEMORIAL EVENTS
No memorial events are currently scheduled.
To offer your sympathy during this difficult time, you can now have memorial trees planted in a National Forest in memory of your loved one.
MAKE A DONATION
MEMORIES & CONDOLENCES
36 Entries
God has another Angel by his side,,Praying for the family
kathy coopef
September 14, 2014
Lori
July 12, 2014
This was my cousin. He was adorable and hilarious. I am glad you are in heaven now litte buddy. I love you Tyrese.
Alana Zimmerman
April 3, 2014
Although I never met you, I have meet the person who would have shaped you into the man you would have grown into. It is often said that people die twice, the first time is when the body no longer lives, the second is when all the people who remember you are gone, for that is when your memory fades. Ashley, take comfort in the fact your son is looking over you all the time, and that you would have raised him to be a good man. Take solace in the knowledge, that even today, he was remembered, not just by you and your family, but by those who loved him because of who he was, even though some of us never laid our own eyes upon his, remember he is still loved, and remembered for years and years to come.
February 19, 2014
Love you forever, dear sweet child. To Tyrese
October 30, 2013
My dearest Tyrese, your precious face shall always burn forever in my heart.I would have loved to cradle you in my arms.
Kaizer Ukinstoff
October 30, 2013
We were blessed with an angel and God called you home. A light to the world that will still shine although you are gone.

RIP Little TYRESE ROBERT RUFFIN JR
I will place a toy plane with pics of you on it at the Altar, as you have flown home to be with GOD
Jennifer Escobar
October 27, 2013
Lauren French
October 26, 2013
My heart just breaks over this tragedy... May God see his momma thru the unthinkable loss of her gift from Him...
October 26, 2013
L L
October 25, 2013
I'm so very sorry for the loss of your sweet little boy. To Ashley, Ty's mom, I'm sending you a big, big hug, and positive thoughts and energy in the hope that it can be a source of strength for you during this difficult time,even if only helps for a little bit.
Kathy Kramer
October 24, 2013
So sorry for the loss of your precious baby boy, rest in peace sweet angel!.he will always be with you in spirit, gone but never forgotten??.
Sarah Rivera
October 23, 2013
So sorry for your loss, rest in peace sweet baby boy?.
Sarah Rivera
October 23, 2013
Rest in Paradise sweet little Angel!!! Please watch over your mama, keep her safe and help her get through this horrible tragedy!!!
S B
October 21, 2013
rip little man your in a better place now may prayers and thoughts be with the family
October 21, 2013
I'm so sorry for your loss and the pain your heart is going through my thoughts and prayers are with u Ashley and your family and that sweet baby boy
Tammy Sweet
October 21, 2013
Ann, my deepest sympathy to you and your family. My thougts and prayers are with you.
Micah (Gillette) Whaley
October 21, 2013
God Bless all the family and friends to this beautiful little boy! This has brought so much sadness to my family. I pray for strenghth and comfort in the up coming months for Ashley and the extended family to little Ty. You were taken way to soon buffy!!! RIP little man!!!
Sarah B
October 21, 2013
Praying for the family and friends affected by this tragedy. God bless and comfort you all.
October 21, 2013
Rest in paradise little man. And my hearts and prayer go out to the family. Never question the work of the lord just know he is always there for you and that the little angel is resting in a better place now.
Latoya Benjamin
October 21, 2013
My thoughts and Prayers are with you and your family, God bless!
Deidra
October 21, 2013
Laura Lottman
October 21, 2013
Blessed Assurance Jesus is His.....

"Death leaves a heartache no one can heal,
love leaves a memory no one can steal."
--From a headstone in Ireland

The darker the night, the brighter the stars,
The deeper the grief, the closer is God!
- Fyodor Dostoyevsky
I often find comfort in these ,I hope you can too ! My thoughts and prayers are with the family in this senseless tragedy breaks my heart to pieces that his father had to meet him under the circumstance he did . May The Lord wrap his arms around him for comfort :'(
Laurie Montgomery
October 19, 2013
BlackPressRadio joins the nation in mourning the loss of beautiful Baby Tyrese Robert Ruffin, son of Adrian Peterson and Ann Ashley Doohen
October 19, 2013
RIP beautiful sweet angel!
October 18, 2013
May you look forward to seeing your precious little boy again someday in Heaven. So incredibly sorry for what you're going through.
October 18, 2013
Showing 1 - 36 of 36 results