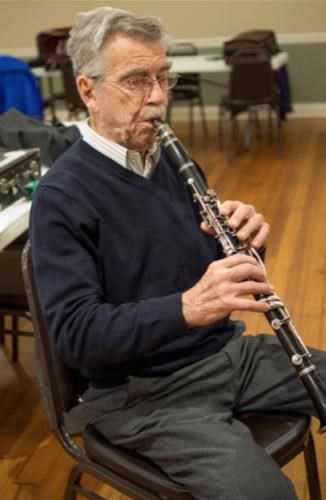 ATHENS - Dr. Bruce Ergood, 88, of Athens, died in Rochester, New York while returning from Silver Bay, a YMCA Conference Center in the Adirondacks and his summer home.
Bruce was the son of Clifford (YCMA director) and Eleanor Ergood, and brother of Ruth Ergood-Waller.
Bruce was a Colgate (1952) and Yale Divinity School graduate (1858) and had been both a YMCA Boy's Work and American Friends Service Committee (AFSC) Midwest College Director prior to his teaching career of over 30 years at Wittenberg College and then Ohio University.
His Ph.D. was from the University of Florida in Latin American Studies. He co-authored "Appalachia: Social Context" with Bruce Kuhre, and wrote "In Our Own Words-100 Year Anniversary of Silver Bay YMCA," as well as cataloguing 50 years of AFSC work in Mexico.
Bruce was a conscientious objector during the Korean War; he performed two years of alternate service with the American Friends Service Committee (AFSC) in Mexico, which began his lifelong interest in Latin America as well as his many friendships there. He spoke "rural Spanish" well, which helped in daily life and his graduate program. He received two Fulbright scholarships to Argentina, as well as one from Rotary International, teaching at the U. of Tucuman. He was loved by his colleagues and students.
Social Action, including the Civil Rights struggle, was a lifelong focus of Bruce's beliefs. His best friend and Best Man was his black Colgate roommate, "the Bowse," who set him straight early on many realities of black life.
Bruce was married in 1956 (while a student) at the Divinity School chapel to the former Jane Sanborn, a Mount Holyoke College graduate who had also worked in Mexico with the Friends, and a Yale School of Nursing student. They lived without an income, and a summer construction accident, in 1957, cost him his right leg. They worked together for their mutual goals, as they did everything to survive, and go on for what Bruce said "was the work God intended me to do."
Bruce, a Rotary member, and his wife, had two children, Chris (of Sanford, North Carolina) and Joel (of Walnut Creek, California), both graduates of Athens High School and Ohio University); and five grandchildren (Brandon, Grant, Claire, James and Andrew), all of whom he loved.
Besides his teaching, Bruce directed several camps, including a canoeing camp for the YMCA and a Quaker inspired one in Vermont - the Farm and Wilderness Camps - at the Farm (1958), the Boy's Camp, and Saltash Mountain Camp (1970s and 1980s). With both groups, he was able to combine his love of the outdoors, young people and God.
Music was his second love: he began playing in community bands in his early teens during the second World War, while most adults were in the service, continued in Argentina and Mexico, and in Athens, co-founded the Athens Dixieland Band with Pat Light, and had an Ohio Arts Council performance grant with Norm Cohn.
He played at the Blessed Sacrament Church (near Silver Bay, New York) and Epiphany (Nelsonville), where his clarinet was greatly appreciated in concert with the organ - especially on the Allelulias. His heart was with the Society of Friends and he believed we were all equal in God's eyes. (A guitar was better for groups at camp.)
For the last several years, he had been singing with the E.M. Davis chorus of Jackson, which he enjoyed as he did the Colgate (1952) and Yale (1958) choruses previously. He had difficulty keeping track of all his interests and schedules and appreciated the help of his wife, Jane, particularly as his cognitive ability faded.
He "made light" of his visual and mobility problems, and "Dad, dad, dad - Hop, op, hop," was a longstanding family joke - until he could no longer hop. He loved every minute of their activities (we had our grandchildren first) and will be greatly missed. Plans for a Celebration of Life are not final.
His last work in LA (on his "bucket list," as they say) was for 2-4 months yearly for 20 years with his wife Jane in Honduras. They worked with the Episcopal diocese in a western mountainous area teaching local residents about health issues, from cleft palate to domestic violence. He had also worked in Belize with the Benedictines. In Athens, he had been instrumental in starting CARAC, the Central America Coordinating Committee, which was interdenominational, during the Central American Wars. Their combined skills of language and health proved very helpful.
"He made the sun come up," as his wife often told him.

Published by The Athens Messenger from Sep. 19 to Sep. 23, 2019.
To plant trees in memory, please visit the Sympathy Store.
MEMORIAL EVENTS
To offer your sympathy during this difficult time, you can now have memorial trees planted in a National Forest in memory of your loved one.
MAKE A DONATION
MEMORIES & CONDOLENCES
6 Entries
I miss playing the old standards with Bruce and his sweet toned clarinet. Silver bay will never be the same without him.
Brice Farrar
Friend
May 15, 2020
Bruce was a good man and a wonderful neighbor at Lake George. We especially enjoyed his clarinet music, complementing the beauty of our neighborhood at Sabbath Day Point. He will be missed. Our condolence to Jane and his sons.

Nancy and Frank Tetz
September 28, 2019
JANE & FAMILY
SO SORRY FOR YOUR LOSS .iT WAS MY PLEASURE TO HAVE KNOWN BRUCE WHILE AT SDP.
GOD BLESS
MARY LOU CURRY
September 28, 2019
We met Bruce in Honduras and always enjoyed visiting with him. Rest In Peace, kind sir!
Laird Markland
September 21, 2019
I knew Bruce through the DM Davis chorus. Such a talented man, I am in awe of all he accomplished in life. My thoughts and prayers for the family at this great loss.
Beverly Morris
September 20, 2019
Chris and family, so very sorry for your loss! My thoughts are with you all at this time
Tuesdee Sharpe
September 20, 2019
Showing 1 - 6 of 6 results