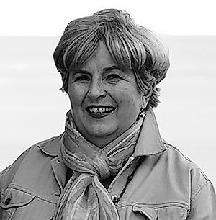 Ann Darby Hood Price Kimbel passed away in California on September 3, 2021, at the age of 83. Ann was a 36-year resident of Dunwoody and parishioner of All Saints Church prior to her move to California in 2019.

Ann was born in Ashland, KY on September 27, 1937, to her loving parents, Minnie Anne and Charles Hood. She was the eldest child in her family and enjoyed five years as an only child, being showered with love and attention from her large extended family who lived nearby. At the age of 5 she became a big sister and took on this role with gusto as four siblings arrived over the next seven years. At the age of six, Ann contracted tuberculosis and had to spend the entire year in bed. This year of solitude fueled Ann's imagination and creative abilities. Ann and her siblings attended Holy Family Parish and School where she was a straight A+ student and winner of the city spelling championship.

Ann was a high school cheerleader when she met Gary Price who was the star basketball player of Holy Family's crosstown rival. She and Gary married and had five children over the next nine years – Gary Jr., Marty, Jennifer, Kevin, and Jody. While raising her five children, Ann studied at Ashland Community College with a focus on writing. She continued to study at local schools as they relocated from Ashland to Cincinnati to Dallas to Chicago and finally to Dunwoody in 1983. During this time, she discovered her passion and skill for watercolor painting which she continued through her final years.

Ann found love a second time in 1989 when she was introduced by a friend to Bill Kimbel. Ann and Bill hit it off immediately and were married a year later. They enjoyed many years of active participation in their church community, travel, including multiple international cruises, and created a loving and welcoming home.

Ann was the life of every room that she entered, making friends easily with a combination of her southern charm and steadfast loyalty. Her passions included her Catholic faith, watercolor painting, playing bridge with friends, and her beloved Corgis. She was enthusiastically engaged in the lives of her grandchildren, being present at most of their births, sacraments, graduations, and other special moments. She was thrilled to have become a great-grandmother in recent years. She was a longstanding member of the Dunwoody Women's Club, The Dunwoody Fine Art Association, the Saint Margaret of Scotland Circle, and a former art teacher at P.A.L.S.

In lieu of flowers, contributions may be made in her name to the Alzheimer's Association at act.alz.org.