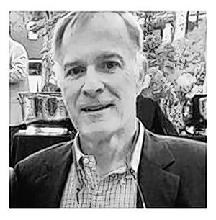 Beloved husband, father, son and brother, passed away in Atlanta on July 2, 2021. Baylor was born in Gainesville, GA on March 23, 1958 to Rafe Banks Jr. and Jane Wood Banks. During high school, he was a boarding student at the McCallie School in Chattanooga – following his father and two brothers – and received the Campbell Memorial Award upon graduation in 1976. In 1980, Baylor earned a Bachelor of Arts in History from the University of Virginia, where he was a member of the Sigma Alpha Epsilon fraternity. After graduating from UVa, he deferred admission to law school and traveled across Europe and Asia, with extended stays in India and Nepal. Baylor earned a Juris Doctor from the University of Georgia School of Law in 1984, and he earned a Masters in Business Administration from the Wharton School at the University of Pennsylvania in 1989. He was a career employment lawyer who spent the last 10 years practicing with SIO Law Group in Atlanta.

In 1987, Baylor met Laura Ball on an elevator in First Atlanta Tower, where they both worked. They married at Trinity Episcopal Church in New Orleans, LA on May 27, 1989. He and his family are members of All Saints' Episcopal Church, where his two sons were baptized. He was a devoted husband and father who took great pride in his family's accomplishments.

It was Baylor's pleasure to cheer on his children and their teams at Westminster, NYO, Buckhead Baseball and Northside United Methodist. He found great joy in music and sports, passions he shared with his wife and sons. He was a member of the Piedmont Driving Club. Affectionately known as "Grizz" by many of his friends, he loved to laugh and was gentlemanly, adventurous, and eager to connect with old friends throughout his life. Baylor was an avid reader and geography enthusiast, and he was naturally drawn to people from many walks of life. He was a meticulous planner of family trips, ensuring that his family appreciated the United States' cultural richness and great natural beauty.

Published by Atlanta Journal-Constitution on Jul. 6, 2021.
To plant trees in memory, please visit our Sympathy Store.
MEMORIAL EVENTS
Jul
8
Service
1:00p.m.
All Saints' Episcopal Church
Atlanta, GA
Funeral services provided by:
H.M. Patterson & Son-Oglethorpe Hill Chapel
MAKE A DONATION
MEMORIES & CONDOLENCES
Sponsored by H.M. Patterson & Son-Oglethorpe Hill Chapel.
4 Entries
Dear Baylor and Sam: Your dad was a really great guy I have always liked and admired since our student days at McCallie. We travelled to England together for a month our junior year. One of my grown up highlights once we were both settled in Atlanta with young children was coaching basketball with him at Northside United Methodist - wonderful years! He was very good at it and didn't let on to the team that I was not. Your dad always put others ahead of self. My favorite trivia about your dad is the fact that he is the only person our age that I've ever known who attended a Beatles concert. It was August 1965 in the brand new Atlanta Stadium, just one year before the Beatles entirely quit doing concert tours. Your dad was only 7 , so your uncles must also be pretty cool to take their little brother along. Please know that I have been praying for both of you and your wonderful mom. I will be there for y'all at All Saints on Thursday.
Sam Chambliss
Friend
July 7, 2021
Laura, I was so sorry to hear of Baylor´s passing. What a terrific man, married to such a wonderful woman! Y´all made a beautiful family together. You, Baylor Jr. and Sam are in my thoughts and prayers. You are surrounded by love and strength from all who know and love you.
Ashley Flowers Bridgman
Friend
July 6, 2021
I knew Baylor through his work at SIO Law Group and the Audo Vero Foundation and remembered him as a superb scholar and a gentleman who was very easy to be around. He will be greatly missed and my prayers go out to his family.
Bob Castro.
July 6, 2021
Laura, this breaks my heart for you and your family, please know I am thinking about you and will keep you in my prayers! Always, Douglas
Laurie Douglas Maloney
July 6, 2021
Showing 1 - 4 of 4 results