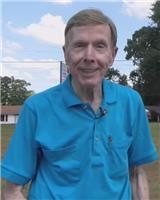 His family said McClellan died peacefully at his home in Smyrna after a years-long battle with Parkinson's disease. He was 88.

He worked as a reporter for 55 years before he retired from Channel 2 Action News.

Don McClellan is survived by his wife of 44 years Gisela, son Scott, stepson Chris Nichols and his wife Alexia and four step-grandchildren.

A celebration of Don's life will be held at a later date due to COVID-19.

From AJC.com: Longtime WSB-TV reporter Don McClellan dies at 88
Published by Atlanta Journal-Constitution on Sep. 27, 2020.
MEMORIAL EVENTS
No memorial events are currently scheduled.
MAKE A DONATION
MEMORIES & CONDOLENCES
25 Entries
What a life, what a journalist and what a friend. I worked with Don at WSB in the early 80s. Our first major coverage was a week at the World’s Fair in Knoxville. Don was a rock in his coverage not only reporting on the feature parts of the Fair but also the hard news aspects and there were many back the. Godspeed Don I am honored our paths crossed on this run!
Jim Miller
Coworker
October 22, 2020
Don was one of the first persons I met when I moved to Atlanta in 1966 to open Cinema Processors. Great guy. My condolences to his family.

Phil Limonciello
Phil Limonciello
Acquaintance
October 1, 2020
I grew up watching Mr. MCclellan on the news and he was a great reporter. Rest well Sir, rest well!!
Keisha Cornwell
September 30, 2020
I remember seeing Don McClellan on TV from the 1960's. He was a great reporter and that reflected on his character as a man. I recall seeing him in his running attire on several occasions as I was a wanna be runner. Blue skies and sunny trail Don McClellan.
Hugh Penn
Friend
September 30, 2020
I was a producer at Channel 2 in the late 90s and I so enjoyed working with Don. He was a great reporter, and an all-around good guy. May he rest in peace.
Katherine Caldwell
Coworker
September 29, 2020
I worked with Don for decades and admired his dedication to journalism and his favorite pastime, running. Praying for all those who will miss Don, love and peace be with you.
Joyce Oscar
Coworker
September 29, 2020
I was Don's boss (supposedly) in the early 1980's. He was a rock - calm, focused and absolutely reliable - one of those who made everyone proud to be a part of WSB-TV news.
Dick Mallary
Coworker
September 29, 2020
In loving memory of a wonderful person. We will love you and miss you always.
Florence Hatcher Record
Coworker
September 28, 2020
I started running in 1979 at the age of 36. At my first 5K in Snellville was there. He beat me to the line. I can remember well the slap, slap, slap of his feet (when he passed me). I dno't exactly remember exactly when it was that I first crossed the finish line ahead of Don - it was a monumental. I cannot begin to count the number of races where I saw Don. He always had a smile and a good word for everybody. I decided to emulate him by saying hello or good morning or hey to every runner I encountered.
Don, I haven't seen you in a number of years, but I miss you already.
John W. Patterson
Acquaintance
September 28, 2020
I remember him as a good reporter in my 54 years in the Metro area, he seemed fair and non biased when reporting on political events, a trait some of the new reporters could learn from.
Ken Hardy
September 28, 2020
I met Don many times at local 5K/10K races in the metro Atlanta area. He always had a smile and a kind word. The Atlanta running community lost a great one. He will be missed.
George Monsalvatge
September 28, 2020
In loving memory of a wonderful person. We will love you and miss you always.
Crystal Allen
September 28, 2020
He was a true Legend. My condolences go out to his family and friends at this very difficult time in their lives.
Abigail Louise Greer
September 28, 2020
As one of those rare Atlanta-area natives, I remember Mr. McClellan well. Atlanta TV will never be the same without his presence. My condolences and prayers for his family and may he rest in His eternal peace.
Steve Williams
September 28, 2020
May there be peace for all as this transition is traveled.
Constance Binkley
Acquaintance
September 28, 2020
Thank you for your service God bless your family and friends see you in heaven
Brenda
Friend
September 28, 2020
My Condolences, I watched Don Mc for many years great journalist.
Milton Griffin
Friend
September 27, 2020
he was a great reporter and I will miss his reporting on the news you will be missed!
Honey Boynton
Friend
September 27, 2020
Hewas a great reporter on channel2!
Honey Boynton
Friend
September 27, 2020
I watched him for years. He really seemed to enjoy his work. My prayers to the family for your loss, may God grant you comfort and peace
Debra Roberts
September 27, 2020
He was a great reporter I had hoped to see more of him on Channel 2 Action News. I remember him being on Channel 2 Action News from its early days in return visits to Atlanta, where I am originally from. I likely saw him on Newsroom when I lived there. He will be deeply missed.