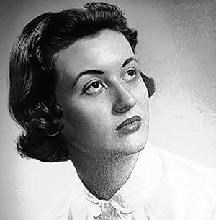 Margaret Elaine (Gretchen) House Gunning of Brookhaven, Georgia passed away after a four-month battle with metastatic lung cancer on August 25, 2021 in Atlanta, Georgia.

Gretchen was born in Rome, Georgia on July 20, 1935 to Margaret Catherine Grealish House, originally of Augusta, Georgia, and Marvin Alvin House of Rome, Georgia. Her younger brother, Thomas Bunion House II, passed away as an infant shortly after birth, and Gretchen was raised as an only child. Gretchen attended South Broad Elementary School and Saint Mary's Catholic School in Rome, and graduated from the eighth grade at Saint Mary's in 1949. She attended high school as a boarding student at Mount de Sales Academy in Macon, Georgia, where she made many lifelong friends, including her closest friend and roommate who was an international student from Mexico. She graduated from Mount de Sales in 1953. Gretchen attended Shorter College in her hometown of Rome for two years before transferring to Saint Mary's College in Notre Dame, Indiana for her final two college years. She graduated from Saint Mary's College in 1957 with a Bachelor of Arts degree with a major in French and a minor in Music Theory.

While at Saint Mary's College, she met the love of her life, John Thomas (Tom) Gunning, Sr. of Atlanta, Georgia, who was a student at the neighboring University of Notre Dame. Gretchen and Tom first met when they were both delegates from the state of Georgia in the Notre Dame/Saint Mary's mock political convention in the winter of 1956. They were immediately interested in each other as two of the rare Georgians at that time in the Notre Dame/Saint Mary's community. After meeting, they set a first date, but both thought they were to meet in two different places. After waiting in vain for each other, they decided to walk back to their dormitories. Fortunately, they passed each other on a walkway, laughed about their misunderstanding, and went on the date. Their children and grandchildren are very grateful that they passed on the walkway!

After graduation from Saint Mary's, Gretchen accepted a position with the US Federal Bureau of Investigation in Washington DC, where she had the opportunity to meet her distant cousin, J. Edgar Hoover, the longtime Director of the FBI. Gretchen and Tom were engaged while she lived in Washington and Tom was serving as an officer in the US Navy, based in Newport, Rhode Island. They were married on December 27, 1958, in Gretchen's home parish church, Saint Mary's Church, in Rome, and enjoyed their "honeymoon" as they drove north to their new home in Rhode Island.

Gretchen and Tom welcomed their first child, Patrick, in late 1959 in the Naval Hospital in Newport, and shortly after relocated back home to Georgia. They welcomed four more children in Atlanta, Catherine in 1960, John Thomas, Jr. (John) in 1962, Michael in 1965, and Matthew in 1970.

Gretchen's true life's work was her family. She was a wonderful and supportive wife for Tom, an amazing and energetic mother to her five children, and a kind and loving grandmother, known as Mom Mom, to her 13 grandchildren. She married into Tom's family of seven children and 28 grandchildren, and, coupled with her own large family after having been an only child, exhibited great patience and calmness throughout her adult lifetime. Gretchen and Tom placed great emphasis on and made a significant investment in educating their children. Each of their four sons graduated from the University of Notre Dame, and their daughter graduated from Saint Mary's College.

Gretchen had a number of interests and pastimes. She was particularly passionate about and skilled at researching the genealogy of her family, Tom's family, and the families of other relatives by marriage. She devoted many hours to researching, cataloguing, and documenting information on over 23,000 ancestors across dozens of generations. Gretchen also enjoyed gardening at their home on their almost 2-acre lot and collecting rare and interesting china patterns. She was an avid reader about all aspects of history, particularly American history. She was a longtime member of the Daughters of the American Revolution with multiple ancestors who fought for our country's independence. She was also a member of the Daughters of 1812 and the Daughters of Union Veterans of the Civil War. Gretchen loved the arts, particularly Baroque and Classical music, and was an accomplished pianist. Gretchen was a past president of the Atlanta chapter of the Saint Mary's College Alumnae Association, and she received the Founder's Day Award from Saint Mary's College in 1984.

Gretchen was predeceased by her parents, Margaret and Marvin House, and her infant brother, Thomas B. House II.

A funeral Mass will be held at Gretchen's longtime parish church, Our Lady of the Assumption Catholic Church, 1406 Hearst Drive, Brookhaven, Georgia 30319 at 11:00 AM on Friday, September 24, 2021. An interment service at Cedar Grove Cemetery on the campus of the University of Notre Dame, Notre Dame, Indiana will be held at a later date.

The family wishes to express much gratitude to Gretchen's caregivers, Ann Marie Hart and Towaka Dawson.