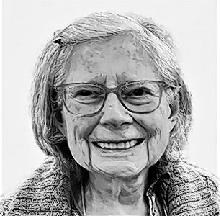 BORN
1931
DIED
2020
GERONA, Isolina Born in Milan, Italy on January 2, 1931, Isolina Gerona died in Atlanta, GA on August 7, 2020. An ardent activist, Isolina led a full life, made many friends, and travelled the world. A devoted wife, mother, grandmother, artist, bookbinder, and apartment manager, Isolina passed peacefully in her daughter's arms due to heart failure at 89 years of age.

The first-born child of Plinio Fantini and Carla Minguzzi, Isolina remembered World War II. While sheltering with nuns in a Catholic school, she faced food shortages and overhead bombings. Along with Italian liberation, Isolina fondly remembered her grandfather's great care and going to the Scala Opera House to see Porgy and Bess. She spent many happy days in the nearby Alps with her sisters, Emma, Cinzia, Lieta, and brother, Elio (deceased). Isolina received her bachelor's in Milan, before attending an English language school in Scotland that changed her life.

In Edinburg, she met her future husband, Juan José Gerona Peña, Sr. The couple moved to Madrid, Spain. Shortly after, Franco's government discovered Juan's printing press that had produced anti-fascist literature. During Juan's ensuing incarceration, Isolina brought him paellas at the City of Cuenca jail. After Juan's release, they had their first child, Carla. Later they would have two more sons, Juan "Johnny," and Ernesto "Pippo" (deceased). Unable to work in Spain, Juan, Sr., took a job at the United Nations, first in Geneva, and later, in New York.

The young family started their American journey in Parkway Village, Queens, a planned, desegregated, and progressive community that housed the United Nations International School. Here, as everywhere, Isolina made many lifelong friends. In Queens, Isolina learned to drive a white station wagon so she could carpool her children, always listening to WBAI. She cooked amazing meringues with whipped cream for school bake sales, sewed intricate Spanish costumes for UN Day parades, and attended anti-war rallies in New York and Washington. Isolina also learned a new trade, bookbinding, and volunteered to repair books for the NY Public Library. She never stopped hosting parties with lots of sangria, political arguments, and Latin American music.

When Isolina and Juan moved to Manhattan, they opened their townhome to people around the world. The Geronas also had opportunities to travel widely, such as trips to Cuba, Guatemala, Algeria, and China. During this period, Isolina completed a BFA at the School of Visual Arts, while managing apartments. Isolina nurtured her husband after his diagnosis of Alzheimer's and watched over her wonderful grandchildren, Nina, Emma, Ellison, Alejandro "Ali," and her beloved cats, Pilgrim and Splash. Days revolved around meals and family, including daughter-in-law, Janice Dubrow, and son-in-law, Robert Desrochers, and many relatives in Europe. Isolina lived independently as long as possible, always ready to march and surrounded by close friends, María Christina, Mariú, Matilde, and Rosa, among many others. Both her children, Johnny and Carla, had the good fortune to spend much time with her during her final year that included a pandemic. Aware of politics to the end, Isolina loved that her grandchildren participated in protests and followed her example of doing good in the world.

Isolina Gerona lived a privileged life during wonderful times and difficult times, and her family and friends are fortunate to have felt her love all these years. Bella Ciao.

The family will hold a virtual Celebration of Life service on September 13, at 12 noon EST. In lieu of flowers, please send donations to Doctors Without Borders.
Published by Atlanta Journal-Constitution on Aug. 16, 2020.
To plant trees in memory, please visit the Sympathy Store.
MEMORIAL EVENTS
To offer your sympathy during this difficult time, you can now have memorial trees planted in a National Forest in memory of your loved one.
MAKE A DONATION
Please consider a donation as requested by the family.
MEMORIES & CONDOLENCES
1 Entry
On behalf of the United Nations International School, our sincere condolences go out to the Gerona Family. May the love of friends and family carry you through your grief. -- Vera Tatel, '00, UNIS Alumni Relations
Vera Tatel
Acquaintance
August 19, 2020
Showing 1 - 1 of 1 results