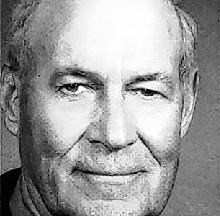 James Ryan Almy, a United States Air Force veteran passed away peacefully in the arms of his loving wife and surrounded by family on July 30, 2021. He was 88.

Born August 29,1932 in Rye, NY to James and Margarete Almy, Jim, as he was known to friends and family, was a devoted husband, father, avid golfer, and dog-lover. He grew up in Pelham, NY, and graduated in 1950 with honors from Pelham Memorial High School where he also played varsity basketball, baseball, and football. His high school basketball team was voted "Team of the Century" in 1950. From high school, Jim was awarded the prestigious War Memorial Scholarship to Colgate University where he graduated Phi Beta Kappa with a degree in Math.

Upon graduation from Colgate University, Jim joined the United States Air Force as a single-engine pilot and served our country from 1954-1957. After retiring from the Air Force, Jim enjoyed a long and successful 30-year career at IBM as a Systems Engineer and in sales. He was instrumental in technological advancements and received many awards for his contributions to the company. After taking early retirement from IBM, Jim spent the next 20 years continuing his love for sales and technology at IEC Systems before returning to the golf course full-time in 2007. Jim played many amazing golf courses around the country, but he spent most of his time on the course at Indian Hills Country Club where he lived and was a member for more than 40 years.

Friends and family are invited to celebrate Jim's life at Indian Hills Country Club on August 6, 2021 at 3:00 PM. In lieu of flowers, please consider a tribute donation to the Atlanta Humane Society. https://atlantahumane.org/in_memory/

Published by Atlanta Journal-Constitution on Aug. 5, 2021.
To plant trees in memory, please visit our Sympathy Store.
MEMORIAL EVENTS
To offer your sympathy during this difficult time, you can now have memorial trees planted in a National Forest in memory of your loved one.
MAKE A DONATION
MEMORIES & CONDOLENCES
2 Entries
.....thinking of you Pat and your family. We have a lot of fond memories of our friendship. Love and prayers
Carole and Mark Klein
Friend
August 6, 2021
My condolences to the family. May you find comfort in your treasured memories and God´s promise to return our loved ones. 1st Thessalonians 4:13 & 14 .
S Chambers
August 5, 2021
Showing 1 - 2 of 2 results