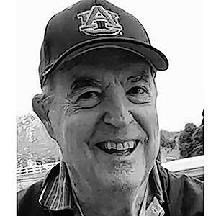 BORN
1943
DIED
2020
FUNERAL HOME
Lawson Funeral Home
4532 Hwy 53
Hoschton, GA
KILGORE, Jon Wilton Jon Wilton Kilgore passed away on April 14, 2020. Jon was born on Dec. 3, 1943 in Fort Jackson, South Carolina to Kathern Keegan Kilgore and Anderson Wilton Kilgore. He was predeceased by both his parents. Jon is survived by his wife Jill Fegley Kilgore, his daughters Kristy Kilgore Shaw (Mark), and Kourtney Kilgore McDaniel, his son Jason Wilton Kilgore (Laura), grandchildren Maryanne Marshall Kilgore, Hayden Wilton Kilgore, William Parker Shaw, Holden Anderson Shaw, Caroline Morgan McDaniel, Marshall Grant McDaniel, sister Sandra Arnold, niece Melissa Baker, nephew Kevin Arnold, son-in-law Pat McDaniel, and his Robinson Humphrey family. Jon was raised in Atlanta and attended North Fulton High School. He then went on to Auburn University where he was a three year football letterman graduating in 1965. After graduation Jon played for five years in the NFL as a punter for Los Angeles Rams, Chicago Bears and San Francisco 49ers. After his football career he and his first wife, Linda Marshall Kilgore, moved their family to Greenville, South Carolina to work for Gaylord Paper Company. They then moved back home to Atlanta in 1971 for Jon to pursue a career in the financial securities business with a specialization in the Municipal Bond market. After starting his financial career with Trust Company Bank, then C&S Bank, Jon then joined The Robinson Humphrey Co. in 1975 on the municipal bond trading desk and was responsible for trading and underwriting tax exempt bonds for the firm. In 1982 The Robinson Humphrey Co. was purchased by Shearson/American Express. Business growth and mergers with Robinson Humphrey remaining autonomous, expanded the firms efforts enabling Jon to manage all municipal underwriting. Jon as an executive vice president, later became the director of the municipal bond department and joined the firms Board of Directors. In the mid 1990's he also became the manager of the public finance department and a member of the firm's executive committee when the firm was purchased by Smith Barney which was later purchased by Citigroup. Jon retired in 2004 to pursue outside business interests, personal investments and philanthropy. We are honoring Jon's request for cremation. Sometime in the near future, when conditions allow, Jon's friends and family will come together to celebrate his life. He will be greatly missed. Arrangements by Lawson Funeral Home, 4532 Hwy. 53, Hoschton, GA 30548, www.lawsonfuneralhome.org, 706-654-0966.
To plant trees in memory, please visit our Sympathy Store.
Published by Atlanta Journal-Constitution on Apr. 19, 2020.
MEMORIAL EVENTS
No memorial events are currently scheduled.
To offer your sympathy during this difficult time, you can now have memorial trees planted in a National Forest in memory of your loved one.
Funeral services provided by:
Lawson Funeral Home
MAKE A DONATION
MEMORIES & CONDOLENCES
Sponsored by Lawson Funeral Home.
5 Entries
Jill and family, Sorry to hear of Jon's passing. I only saw him a few times but he was the much older cousin I always looked up to. May God grant you peace in this difficult time. Daria
Daria Winker (Keegan)
Family
October 20, 2020
Jon was my cousin, although I only met him in person once, as there was a bit of an age difference. However, I absolutely loved getting to know him a little "from a distance" last year as he worked very hard at providing to me some beautiful keepsakes of our grandparents. HIs enthusiasm for passing on our heritage was inspirational and much appreciated. I will treasure the memories he passed on to me, as well as the memory of getting to know Jon just a little this last year. I will keep his beautiful family in my thoughts and prayers as they navigate a difficult time during this crazy year.
Grace Johnson
October 19, 2020
My Dad was my hero.I always wanted him to be proud of me.He told me when I was 16 that I was to nice and people were going to take advantage of me . He was so right it happened more than I could say.I miss your wisdom Daddy and will always hear you in my mind.I hope you can be be proud of me one day.
Kourtney Kilgore
Daughter
July 1, 2020
We were truly blessed with terrific kickers at Auburn
back in the'60's and "Gpre" was one of them as was
evidenced by his pro career after AU. Enjoyed his
sense of humor and friendship.
2.5 Penick
April 20, 2020
Such a kind man. Our thoughts and prayers go out to his family
Anonymous
April 16, 2020
Showing 1 - 5 of 5 results