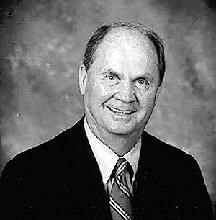 Loyce W. Turner of Valdosta, age 93, died peacefully at home surrounded by family on April 16, 2021.mLoyce was many things to many people – veterinarian, farmer, banker, statesman and philanthropist but first and foremost he was a family man. Born December 2, 1927 in Turner county to George Warren Turner and Wille Mae Young Turner, he grew up in Sylvester deciding at age four to be a veterinarian. He attended Auburn University for undergraduate and veterinary school earning his degree in veterinary medicine in 1948. He was so young that he had to wait several months to turn 21 in order to receive his license to practice. He went on to serve as a captain in the U.S. Army Veterinary Corps from 1951-1953. His marriage to Annette Howell in 1957 put a happy end to his tenure as dashing president of the local bachelor's club and they went on to raise three children. For 43 years Annette worked by his side at his veterinary clinic and at the fat cattle or feeder pig sales, often with the three kids in tow. She accompanied him on countless trips to Atlanta and stood beside him through every step of his life until her death in 2000. Loyce was deeply committed to his community and instrumental in changes that have helped shape Valdosta. He was one of the founders of First State Bank and Trust and help shepherd the merger with CB&T which went on to become Synovus Financial Services. As Chairman of the Chamber of Commerce and active member of Rotary Club, Farm Bureau, and Christ Episcopal Church, Loyce was a clear choice when a Georgia State Senate seat opened in 1974. He ran and won and held that seat from 1975-1998 when he stepped down due to his wife Annette's illness and subsequent passing. In her memory, he and the Turner family established and provided the seed funds for the Annette Howell Turner Center for the Arts in downtown Valdosta. During his time in the Senate, Loyce served as the Senate Majority Whip, the Chairman of the Banking and Financial Institutions committee and sat on the Appropriations and Higher Education committees. He co-authored sweeping pension reforms, sponsored many anti-crime bills and was recognized as an expert in tax and revenue issues. Among the achievements he held most dear was introducing the legislation that elevated Valdosta State College to University status. After stepping down from office, Loyce was appointed to the Georgia Department of Natural Resources where he served for 13 years. In 2005 as the Board's Chairman, he focused his attention on the purchase of key conservation lands throughout the state. During this time, he met his second love, Ingrid Kiernan. They married in 2006 and this ushered in a chapter of travel and adventure. They enjoyed a summer home in Sky Valley, GA with time to golf and garden. Together they journeyed to South Africa on safari, walked the Great Wall of China, strolled the streets, and tasted the foods of Portugal, Germany and France. At the end of the day, however, Loyce always loved to return to his own farm and home. He leaves behind his wife, Ingrid Turner of Valdosta; daughter, Sally Turner Querin and former son-in -law, Bill Querin of Valdosta; son and daughter-in-law, Warren & Kelly Turner of Valdosta; daughter, Susan Turner of New York, NY; stepdaughter, Michelle McGreevy of Miami, FL, and sister Lana Jean Norris of Ponte Vedra, FL. Also surviving are several grandchildren, Jessie (Mike) Bolster, Katie Querin, Holly Querin, Caroline Turner and Loyce Turner, III; step granddaughters, Kirsten McGreevy, Leah McGreevy and many nieces and nephews. He is preceded in death by his first wife, Annette Howell Turner and a sister Laverne Jeffords. The family will have a private burial service. In lieu of flowers please consider a donation to The Annette Howell Center for the Arts at www.turnercenter.org or Regency Southerncare Hospice at www.regencysoutherncarehospice.com. Condolences may be conveyed to the family at www.mclanecares.com. Carson McLane Funeral Home.
Published by Atlanta Journal-Constitution on Apr. 19, 2021.
To plant trees in memory, please visit the Sympathy Store.
MEMORIAL EVENTS
To offer your sympathy during this difficult time, you can now have memorial trees planted in a National Forest in memory of your loved one.
Funeral services provided by:
Carson McLane Funeral Home
MAKE A DONATION
MEMORIES & CONDOLENCES
Sponsored by Carson McLane Funeral Home.
2 Entries
Loyce was a wonderful State Senator and DNR board member. I thoroughly enjoyed working with him in both of these capacities. I know of no one better!
Duane Harris
Friend
April 27, 2021
Thoughts and prayers to the Turner Family. Dr. Turner was truly one of a kind. He will truly be missed.
Janie & David Baker
Friend
April 19, 2021
Showing 1 - 2 of 2 results