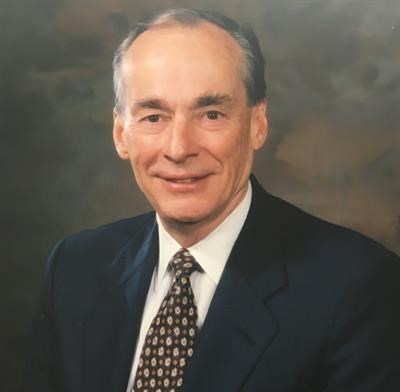 BORN
1930
DIED
2018
FUNERAL HOME
H.M. Patterson & Son-Arlington Chapel
173 Allen Road Ne
Sandy Springs, GA
Dr. Mark Allen Gould, 87, died on April 5, 2018, with his family by his side in Atlanta, Georgia. Dr. Gould was born December 1, 1930 in Kenova, West Virginia to Stanley Gould and Helen Miller Gould. He spent his childhood growing up in Maine and graduated from Thornton Academy in Saco, Maine in 1948. He attended Bates College, where he earned a B.S. degree in Biology in 1952. Upon graduation, he pursued his Doctor of Medicine, which he received from Tufts University in 1956. Dr. Gould interned at Henry Ford Hospital in Detroit, Michigan, where he met his bride of 61 years, Gloria C. Gould. He served a residency in Internal Medicine at Georgetown University Hospital in Washington D.C. He then served as a Captain in the United States Air Force, acting as a physician at Amarillo A.F.B. Dr. Gould continued his medical training during a Psychiatry residency at Washington University Medical Center in St. Louis, Missouri.

Dr. Gould joined private practice at Brawner Psychiatric Institute, Smyrna, Georgia in 1963, enjoying a distinguished career for 31 years. He was appointed Medical Director in 1969, earning several state and national awards for his ideas and expertise in treating mental illnesses. He served as President of both the Georgia Psychiatric Association, which named him "Man of the Year" in 1970, and the National Association of Private Psychiatric Hospitals. He was also appointed by Georgia Governor Jimmy Carter to the State Mental Health Advisory Board and served as Chairman of the Metropolitan Atlanta Council on Mental Health. Dr. Gould also enjoyed teaching as a clinical professor at Emory University and Morehouse School of Medicine. A Distinguished Life Fellow of the American Psychiatric Association, Dr. Gould continued his practice well into his eighties, providing over twenty years of locum tenens psychiatric services for hospitals in Georgia, Massachusetts and Maine.

After retirement, Mark particularly enjoyed traveling around the world, visiting over 50 countries and often returning to his childhood home state of Maine. "Papa" was also a doting grandparent and was a role model for his three grandchildren, sharing his love of learning through his story-telling and never missing any special events in their lives. Mark was preceded in death by his parents and two brothers, Howard Gould and Keith Gould. Mark is survived by his wife, Gloria C. Gould, his son Mark Gould and daughter-in-law, Allison Gould of Atlanta, Georgia, and his son Thomas Gould and daughter-in-law, Teresa Gould of Westfield, New Jersey. He is also survived by three grandchildren, Michael Gould, Caroline Gould, and Christina Gould as well as six nieces and nephews.

To plant trees in memory, please visit our Sympathy Store.
Published by Atlanta Journal-Constitution from Apr. 8 to Apr. 9, 2018.
MEMORIAL EVENTS
No memorial events are currently scheduled.
To offer your sympathy during this difficult time, you can now have memorial trees planted in a National Forest in memory of your loved one.
Funeral services provided by:
H.M. Patterson & Son-Arlington Chapel
MAKE A DONATION
MEMORIES & CONDOLENCES
Sponsored by H.M. Patterson & Son-Arlington Chapel.
1 Entry
I am very sorry to hear of the passing of your love one Mark. May you find peace and comfort in the God of all comfort. Matt 5:4.
White-Atl.
April 9, 2018
Showing 1 - 1 of 1 results