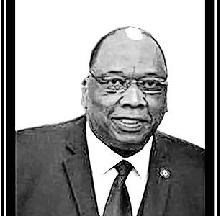 Robert Henry McMichael, II, born May 16, 1943, a 1960 graduate of Luther Judson Price High School, a 1964 graduate of Morehouse College, and a 1981 graduate of the Woodrow Wilson School of Law at Princeton University. A law enforcement executive, community and church leader. As a trusted law enforcement executive, he served as Special Agent with the Intelligence Unit of the Fulton County Georgia District Attorney's Office as Chief Agent with the Intelligence Unit from 1967. He was appointed as Interim Sheriff of Fulton County in 1989. President Bill Clinton appointed Robert to serve as the United States Marshal for the Northern District of Georgia for both terms of the Clinton Administration in 1993. As a beloved community and church leader, he participated in various local and national professional and civic organizations to include Butler Street YMCA Board of Trustees and the National Organization of Law Enforcement Executives (NOBLE). Robert also served on the Board of Trustees for Hoosier Memorial United Methodist Church where he was an active member. He was an exemplary and loving family man of eight grandchildren. On Wednesday, April 28, 2021, Robert transitioned peacefully at his home. He leaves to cherish his memory, his wife, Kathye, children, Arlene Brooks (Fayetteville, GA), Belinda Michael (Atlanta), daughter-in-law Dina McMichael (East Cobb, GA); sisters, Joyce Thomas (East Point, GA), Birdie McKay (Washington, D.C.) Kate McNease (Atlanta); and brother Charles McMichael (Atlanta); grandchildren, and a host of nieces, nephews, extended relatives and friends. Celebration of Life Friday, May 7, 2021, 11 am, Hoosier United Methodist Church, 2545 Benjamin E. Mays Dr., S.W. Atlanta, GA. Public Viewing TODAY from 4 to 6 pm at Murray Brothers Funeral Home (404) 349-3000 mbfh.com.

To plant trees in memory, please visit our Sympathy Store.
Published by Atlanta Journal-Constitution from May 5 to May 6, 2021.
MEMORIAL EVENTS
May
6
Viewing
4:00p.m. - 6:00p.m.
Murray Brothers Funeral Home
1199 Utoy Springs Rd, SW , Atlanta, GA
May
7
Celebration of Life
11:00a.m.
Hoosier United Methodist Church
2545 Benjamin E. Mays Dr., S.W. Atlanta, GA
Funeral services provided by:
Murray Brothers Funeral Home
MAKE A DONATION
MEMORIES & CONDOLENCES
Sponsored by Murray Brothers Funeral Home Cascade Chapel.
4 Entries
Kathy, Our love and prayers are with you and the family and may God continue to
bless and keep you all in his care.
Doris Harmon
Family
May 7, 2021
Condolences to Kathye and family. Mr. McMichael will be greatly missed. I will never forget his kindness and gentle spirit. May God bless and keep his family.
Nancy Guenther
Neighbor
May 6, 2021
Our love and prayers are with you Kathy and family during your time of sadness. May God continue to bless and keep each of you in His Divine Care. Johnny &Betty Cowan
Betty &Johnny Cowan
Friend
May 6, 2021
We were blessed to work with "Mac" at both Fulton County and Rich's. He was a dear friend and confidant. Mac always put others first and truly lived Micah 6:8. He acted justly, loved faithfully and kindly, humbly walked with God. Our thoughts and prayers are with his family now and in the days to come. We thank God for allowing our life's journey to cross paths with Mac.
Jim and Dinah Watson
Friend
May 5, 2021
Showing 1 - 4 of 4 results