William Harrison "Harry" Maddox, age 78, of Roswell, Georgia, passed away Sunday, September 5, 2021. Harry was born in Winder, Georgia, to Jeanette and Talmadge Maddox on May 18, 1943 as the first of four boys. Talmadge passed away when Harry was a baby, and he grew up with Herman Ray Grindle as his father. Harry was a graduate of Gainesville High School and received his BS from Georgia State University and a Bachelor of Laws from John Marshall University. He spent his career as an entrepreneur, serving as an independent manufacturer's representative for numerous companies, including Head Sportswear, Le Coq Sportif, Diadora, Select Sport, Bogs, Rider Sandals, DeWalt, and Caterpillar. Harry was the ultimate salesman and made a friend of everyone he met. As a man of great faith, he was devoted to his church, First Baptist Atlanta, serving as a member of the choir and was involved in various activities. He was devoted to his family and friends and loved kids and dogs. He would seek out anonymous ways to be philanthropic. Harry loved a good political and religious "debate." He was devoted to his family and friends and loved kids and dogs. He would seek out anonymous ways to be philanthropic. Known for his zest for life and adventurous spirit, he enjoyed hobbies like cycling (road and mountain), snow skiing, scuba diving, metal detecting, hunting and trap shooting, for which he won many awards; Harry was never one to turn down an adventure! He is survived by his wife, Abigail Smith Maddox; his daughter, Lyn (John) Maddox Mettler; his brother, Dennis (Dale) Grindle; two grandsons, Patrick Harrison and Maxwell Joseph Mettler; two stepdaughters, Tiffany Rosselot and Amy (Scott) Brewer; two step-grandsons Jackson Carter and Tristan Callum Brewer; sister-in-law, Linda (Gary) Shrock; brothers-in-law, Craig (Belinda) Smith and David Smith; numerous nieces, nephews and countless friends and colleagues. He is preceded in death by his mother and father, Ray and Jeanette Grindle; his brothers, James and Phillip Grindle; and his beloved Aunt Bertie and Uncle Bob Orr. Celebration of life services will be held 12:00 PM Friday, September 17, 2021 in First Baptist Atlanta's Worship Center. The family will receive friends one hour prior. Please consider memorial contributions to First Baptist Atlanta, 4400 North Peachtree Road, Atlanta, Georgia 30338 or at www.fba.org. Please leave a memory or your condolence to the family at www.roswellfuneralhome.com. Services have been entrusted into the care of Roswell Funeral Home, 950 Mansell Road, Roswell, Georgia 30076. 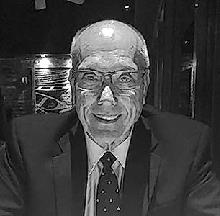