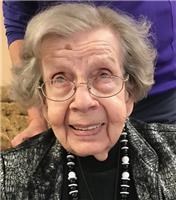 Dorothy Marie Smith Shirley Soucek was born April 15,1919 to Floyd and Faye Forsythe Smith. She peacefully joined the big bridge game in the sky September 17, 2021. Family was nearby.

June 8, 1941, she married her college sweetheart, Robert Paul Shirley; World War II interrupted their lives as Bob served in London and Dorothy worked in Hartford Connecticut. After the war they returned to Atlantic where Dorothy became a geography teacher and Bob took over her father's chiropractic practice. After Bob died in 1968, she took a college geography class that took a six week trip around the world. Dorothy used what she learned on that trip in her teaching.

In 1972, Dorothy married Henry Soucek and move to Washington, Iowa. Dorothy and Henry enjoyed a decade of RV travel with a focus on visiting family & friends.

Several years after Henry's death she made the move to Kerr Hall at the UP Home. Dorothy loved writing up newspaper articles about Kerr Hall monthly activities. Special events included her 90th birthday bridge party in the main dining room, and her 100th celebration at the Garrett Center.

Dorothy was preceded in death by her siblings: Garland Smith (WWII), Mary Ellen Marsden, Marcella Thompson, and Floyd Smith along with her sons: Steve Soucek, Stanley Soucek, and Doug Shirley.

Dorothy's service will be held 9:30 a.m. Thursday, Oct. 14 at the Jones-Eden funeral home where the family will receive friends from 9 until 9:30 a.m. Burial will take place at Atlantic Cemetery in Atlantic. In the spirit of Dorothy's generosity, donations may be made to a charity of the donor's choice. Online condolences may be sent for Dorothy's family through the web at www.jonesfh.com