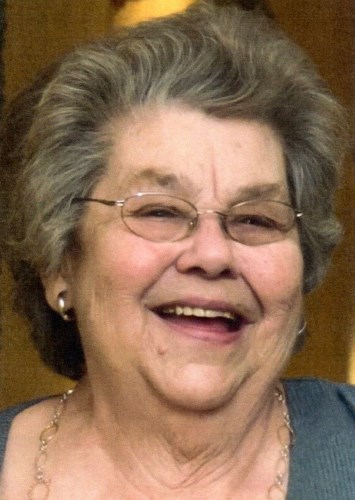 AUBURN - Barbara Jean (Krueger) Kennedy, of Auburn, passed away peacefully in her home Tuesday, June 22, 2021 at the age of 89. She was born in Arcadia, New York on April 30, 1932, the daughter of John and Mildred Krueger.

Barbara was an avid reader and enjoyed knitting. She loved spending time with her family and spoiling her grandchildren and great-grandchildren. Barbara adored her children and believed she was lucky to have the opportunity to stay home to raise them. Once they were all in school, she made herself busy by working at K-mart, Cleantown, the Boy Scouts of America and in the Cayuga County Legislature Office.

Barbara was a member of Saint Mary's Church and looked forward to attending Mass each Sunday and then brunch with her sister, Norma.

Barbara was predeceased by her husband, Paul F. Kennedy in 1998, and her grandson, Mathew Ryan Kennedy in 2008.

She is survived by her five children: Paul M. Kennedy (Anita), Michael A. Kennedy, Kimberly I. DeMaio-Roberts (Richard), Bruce H. Kennedy, and Bridget E. Kennedy (Alicia); three sisters: Norma West, Myrna Wishart, and Donna Krueger; 18 grandchildren; several great-grandchildren; two great-great granddaughters; numerous nieces and nephews and Sherry Kelsey, one of the countless number of kids she treated as her own over the years.

Memorial contributions may be made to Hospice of the Finger Lakes, 1130 Corporate Dr, Auburn, NY 13021

Published by The Citizen on Jun. 25, 2021.
To plant trees in memory, please visit our Sympathy Store.
MEMORIAL EVENTS
Jun
27
Calling hours
2:00p.m. - 5:00p.m.
Farrell's Funeral Service, Inc. - Auburn
84 South St., Auburn, NY
Jun
28
Graveside service
10:00a.m.
St. Joseph's Cemetery
Fleming, NY
Funeral services provided by:
Farrell's Funeral Service, Inc. - Auburn
MAKE A DONATION
MEMORIES & CONDOLENCES
Sponsored by Farrell's Funeral Service, Inc. - Auburn.
3 Entries
I am deeply sorry for your loss Donna. My Prayers to you and your family at this difficult time. Mary C. Housel
Mary C. Housel
July 4, 2021
We remember aunt Barbara especially for the kindness and patience she offered our mother as she was aging and often alone. Barbara went out of her way to make regular visits and to listen and to find something to make our mom smile - not always an easy task. Barbara always seem to have a positive attitude and a very generous spirit. She raised a family and participated in her community, and made the best of what life offered and didn't seem to complain. She will be missed by many.
Vonnie and Dave DeJoy
June 27, 2021
Kim and family had alot fun growing up at your mom house she was great lady .
Laurinda Mcgrail
Family
June 26, 2021
Showing 1 - 3 of 3 results